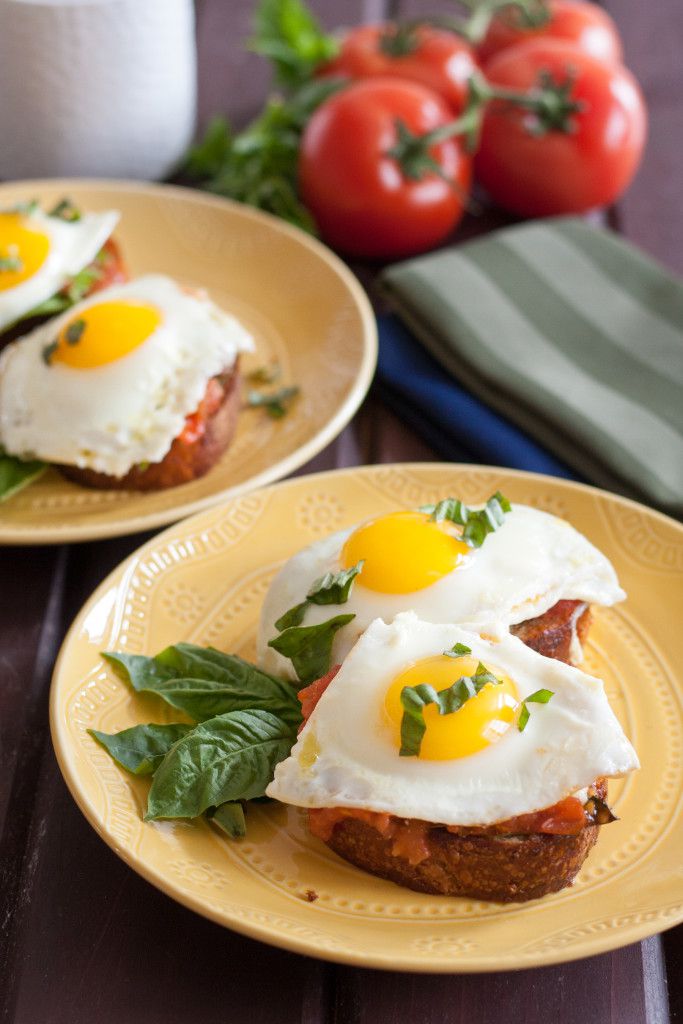 Basil and almost anything is one of my favorite flavor combinations ever. Ever. It’s just such a versatile ingredient, and one of the plants I always try to cultivate in my garden. I’ve had only minor success. But spring is coming soon, and as the eternal optimist, I have renewed hope for this year’s plant. You’ll be able to gauge success based on how much breakfast bruschetta I post on Instagram. Breakfast bruschetta is also a favorite, although a newer addition to the list.

Bruschetta, I’ve had, and breakfast, obviously, I’ve also had, but I hadn’t tried making a breakfast bruschetta until I received a little inspiration from Byron at Pretty Practical Pantry. 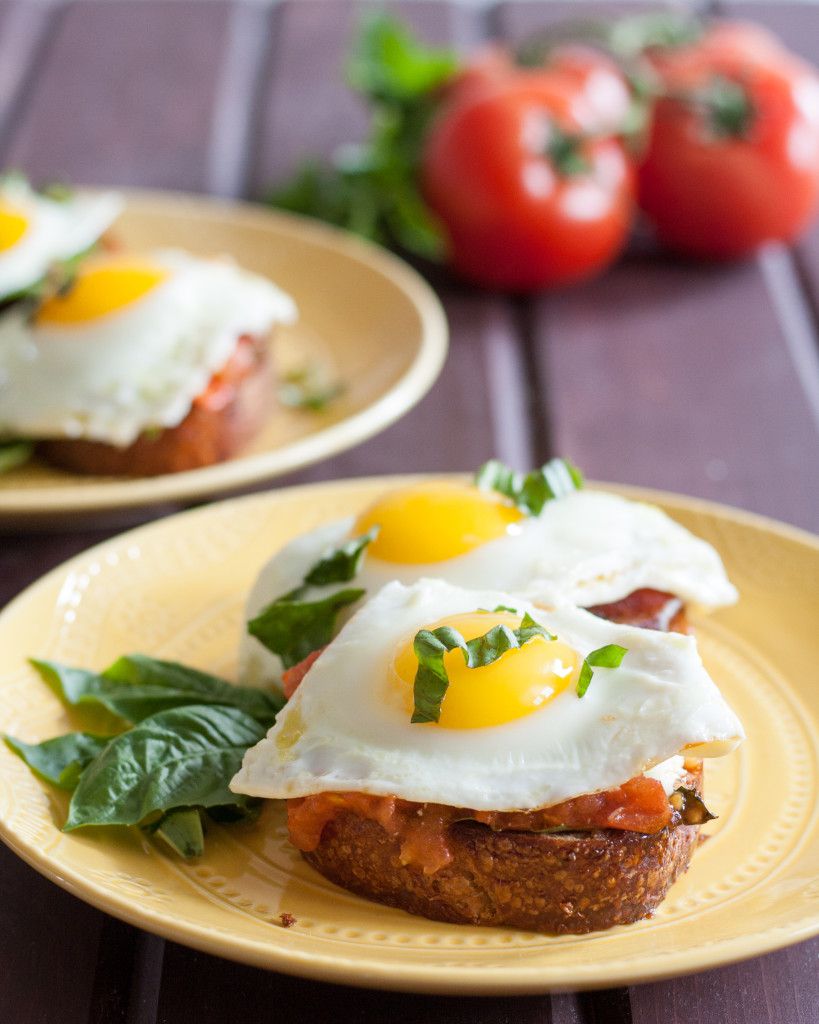 One of the beautiful things about blogging is that I’ve made many “friends” along the way. I use the quotation marks only because I’ve never met most of them in person. Our “office” is virtual and you find your little group after you see each other enough times in food blogger groups around the internet. Kind of like staff meetings, only not. Anyway, this year I’ve decided that I’m going to make more of a concerted effort to actually do a better job of browsing my blogger friends’ recipe indexes and making their recipes. Since I had to step back from the Secret Recipe Club at the end of last year in an attempt to find that work/life balance, this has been a fun no-deadline project.

I’ve actually made two recipes from Byron’s site recently. The breakfast bruschetta inspired by his Crispy Toasts with Charred Tomatoes and Fried Eggs, and Crispy Fried Honey Lemon Cauliflower – the Godfather’s selection for Valentine’s Day dinner. Strangely enough, the Godfather chose both of these recipes, something that never would have happened early in our marriage when he was still wary of all vegetarian recipes. 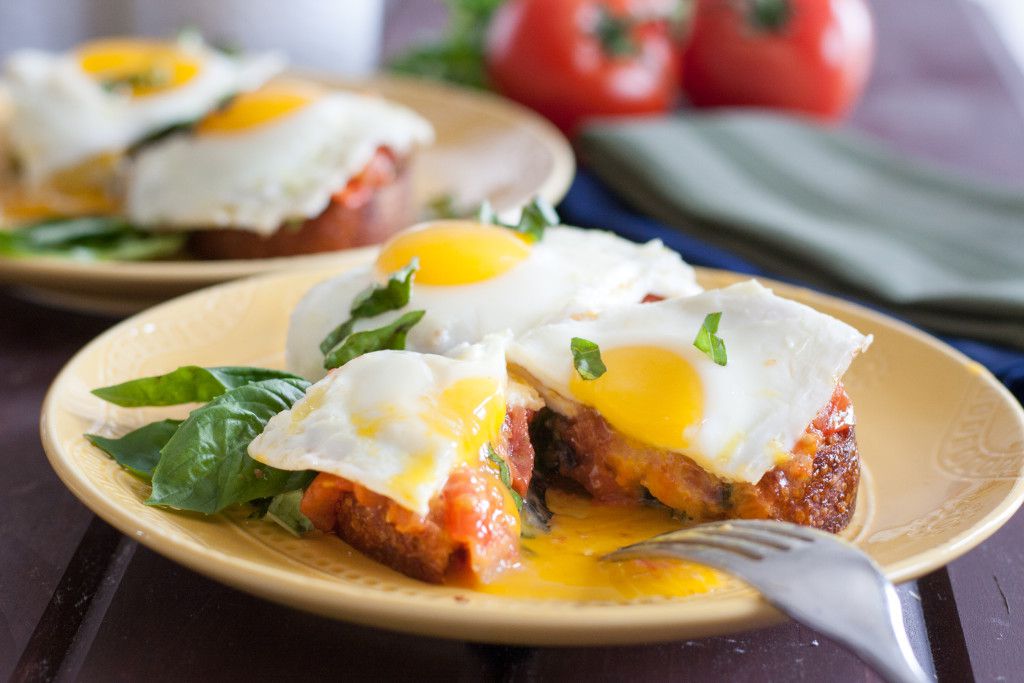 On a long side note, if you’re subscribed to my e-mail list you may have read that I planned to devote February to vegan eating. Clearly, that didn’t work out as planned, and not for the reasons you might think. I didn’t find myself missing any foods, especially when cooking at home, but I found myself in a very awkward situation when outside the house. Social gatherings were difficult and often had no or very very limited vegan options, and finding vegan friendly menu options at restaurants that aren’t plain salad is still challenging. The point of the exercise though was to help me get out of my cooking rut and add some new plant-based dishes to my repertoire, and in that way, it’s been a success. I have at least a dozen vegan recipes I’ll be sharing in the near future, and I’m opting to finish out the month as vegan as possible, vegetarian at best. But the best part, in my opinion, is that for the first time in the nearly 13 years we’ve been together, the Godfather has enjoyed primarily plant-based eating. In fact, with some exceptions, he’s been primarily vegetarian this month, and has eaten most of the vegan meals I’ve prepared without adding anything. This is a pretty big deal for a “meat, potatoes, and bread” kind of guy. 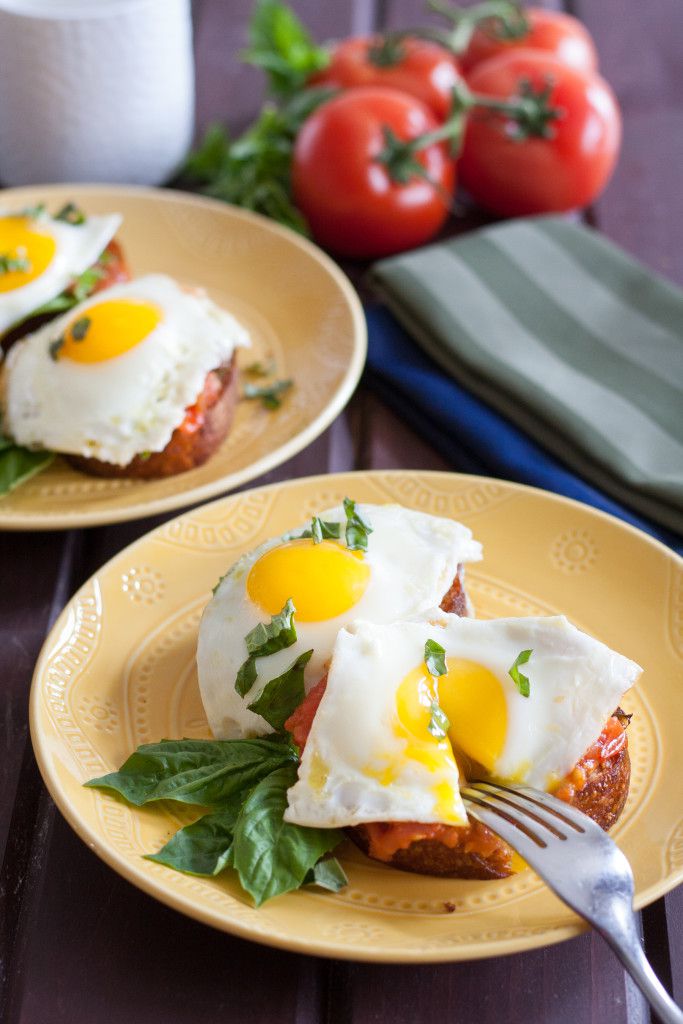 Back to the recipe. I burn toast about 80% of the time when I try to use the broiler, so I skipped that and toasted the bread and grilled the tomatoes on my grill pan instead. I used a rather soft tomato, a firmer tomato will hold up a bit better to grilling, but the end result was delicious, so use what you have. You can’t go wrong with olive oil, tomato, basil, and bread. It’s a fact. If you’re making for company or want an egg that sits perfectly atop the bruschetta, poach the eggs instead of frying.

I even made you a video:

THis looks amazing! I love finding vegan and vegetarian recipes to try. I honestly never felt better in my life than when I was vegan, but like you said it is so hard to make that work in the real world when options are limited. I would be happy to go back to a more plant based diet though. We've fallen back into some bad habits and meat is just so expensive. This recipe looks amazing and I can't wait to try it with some eggs from our chicks in the spring and garden fresh ingredients. Mmm makes everything better