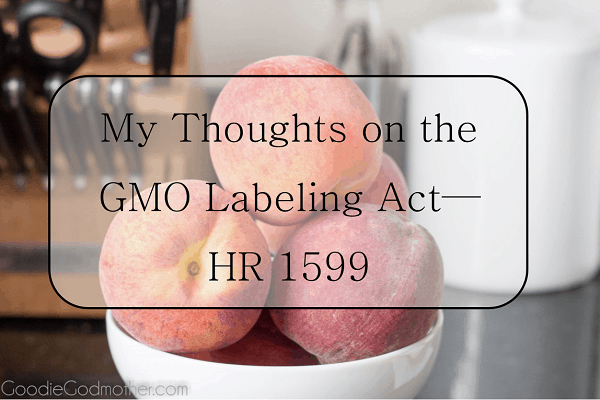 This week, the United States House of Representatives passed a bill that prevents the labeling of GMO foods – H.R. 1599. This means that large companies can use genetically modified ingredients in food and sell, without a label, to consumers – even using words like “all natural” and “healthy” – neither of which have any legal standard for their use in food. I am heartbroken. I’m not sad because our diet is perfect, it’s not, but I try to make the best decisions I can for myself and my family, as I’m sure you do too, and this GMO Labeling Act makes it that much more difficult.

In this country, we are used to cheap food. Cheap food that still results in large profits for major food companies and mainstream culture doesn’t often stop to think about how that’s possible. It’s possible because the food being grown isn’t natural! You have these engineered seeds being grown that resist weather patterns and natural pests, they don’t provide nourishment for bees, they won’t propagate seeds for the next year so farmers have to return to buy new seeds instead of saving from year to year. You’ll have a bigger, shinier apple, with no flavor. The grocery stores are filling with smoke and mirrors and much of the substance is gone! Look at the boxes on the shelf, how many have been repackaged in an “eco-friendly” manner with meaningless marketing words like “no preservatives” (but it doesn’t expire until 1.5 years later?), “all natural” (uranium is all natural too), or whatever else the marketing team thinks of. Is this what we really want?

If their products aren’t “that bad”, why lobby so hard to hide what they contain?

Over the years, I’ve made an effort to transition to making much of our food from scratch, eating seasonally, and purchasing from local sources I trust. But my family moves around every few years and I never know what I’m going to find in my new community. I’m also a busy working mom and I don’t have time to make absolutely everything from scratch, so I do buy some pre-made items. I appreciate the convenience! Nevertheless, I would love the peace of mind to know that I’m choosing a GMO-free option when I’m at the grocery store. Or if I am going to purchase something that contains a genetically engineered (GE) ingredient, let me be in charge of making that decision. Giving consumers important information, like a mandatory labeling of GE ingredients, leaves the choice in their hands. It lets the consumer decide where to spend and how, IF it matters to them.

It matters to me. And if you’re reading this, it probably matters to you too.

I’m feeling a little at a loss right now. It won’t be too many years in the future when we see the health effects of the increasing number of GE ingredients in our food system, but will it be too late by then? Big Agriculture, Big Food, and the insatiable appetite for “cheap at any cost” is already killing small farms, hurting small producers. If small farms feel too much pressure and adopt the same BigAg practices, where does a consumer go? I believe that won’t ever fully happen, but I also thought that there was no way elected government officials supposedly acting in the best interest of their constituents would EVER vote to pass such a detrimental act.

Our only hope is in getting the senate to stand up to special interest...I won't be holding my breathe. But there is hope, as consumers we can demand that companies respect our wishes, we can vote with our dollars, we can put up a ruckus. This summer I've done a couple posts on the importance of GMO labeling, and have been fascinated by the different companies who have responded positively (Ben & Jerry's for example) and those who continue to push to keep us in the dark (Quaker) so I guess we'll be eating a lot more ice cream in our house ;-)

If this had been a close vote, I'd have hope. Since it definitely wasn't, I don't think it will be stopped. We are very lucky that there are still companies that believe in true transparency and providing information for consumers to make their own choices, but passing the DARK Act will make it harder for consumers who may want to make good choices but don't have time to research, to decide. This bill has too high a social cost because it effects EVERY American. If you eat, this is your problem. It's OUR problem.

There are very few situations in which a person benefits from less information and not more. If GMOs are so great why not spend millions of dollars telling me how awesome they are instead of spending millions to hide them from me?