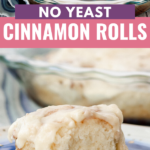 When you want soft, delicious cinnamon rolls but don’t have any yeast, make this no yeast cinnamon rolls recipe with a rich cream cheese glaze! It’s so easy and the rolls are ready in under an hour.

Darlings, this recipe might just be my favorite new kitchen discovery. These no yeast cinnamon rolls were a hit! I had everything I needed to make them in my pantry, and the texture was a dead ringer for my usual one-hour cinnamon roll recipe. This is a certified Big Deal since it means I can make cinnamon rolls from scratch, anytime. It’s so nice to have options!

How do these yeastless cinnamon rolls work?

I bet you’re wondering how the rolls get their rise. Because a bread without yeast is usually heavy, right? Not in this case! The leavening agent that provides a lovely lift here is baking powder! Which, when you think about it, totally makes sense.

If baking powder can provide rise for scones and biscuits, why couldn’t it work in other quick dough recipes too? And since these one-hour cinnamon rolls require no rise time, they’re ready to bake as soon as they’re assembled. Because the baking powder acts the same as it would in biscuit dough, I like to set up the rolls so they are almost touching to get maximum rise. The soft sides after you pull the rolls apart are a nice bonus too.

A few tips for baking success…

First of all, you’ll want to treat these the same way you would biscuit dough, so keep the mixing to a minimum. The less you have to mix and knead, the less gluten activation, and the more tender the dough. A little mixing is okay, so don’t stress. You’re going to love these, promise.

If you don’t want to mix by hand, you can use a stand mixer fitted with the dough hook, or even a large food processor. No matter how you mix, definitely follow the instructions in the recipe for how to add the liquid. You want to start by adding just half of the liquid, then add in small amounts until you get to the correct dough consistency. There should be no dry bits of flour, but it shouldn’t feel sticky when you touch it. Keep in mind that it is a soft dough. You shouldn’t have any sticking to your hand if you touch it with your fingertip, though.

Third, you can bake these immediately or freeze them to cook in smaller batches. To freeze, take your assembled rolls (after you fill and slice but before baking), and place them on a parchment-lined baking sheet. Freeze for an hour or so until solid, then place in an airtight container and store up to three months. When you’re ready to bake, just put the number of desired cinnamon rolls on a baking sheet and add about 5 minutes to the cooking time since you’re baking from frozen.

If you like soft sides when you pull apart the cinnamon rolls, you’ll want to arrange these rolls only about a half inch apart. They’ll spread and touch as they rise, giving you nice soft sides as pictured. If you’d prefer to have more uniform looking rolls that you don’t have to pull apart, arrange the cinnamon rolls on a parchment paper or silicone mat-lined baking sheet.

The cream cheese icing recipe provided is pretty thick as written. That is for two reasons. First, I’m impatient and like to frost the cinnamon rolls almost immediately after I take them out of the oven. The heat melts the frosting, so using a thicker frosting means that I still get a nice opaque glaze after it melts over the hot rolls. When I mix the glaze after I pull the rolls out of the oven, I’ll thin it with a little extra liquid and then spread on the still-warm rolls.

If you don’t have any cream cheese on hand, you can just use the butter, vanilla, and powdered sugar. You’ll need to add a little more liquid to thin. The resulting glaze will be more transparent, but it will still taste amazing, and that is what’s important.

I hope you love this yeast free cinnamon roll recipe from scratch, darlings!