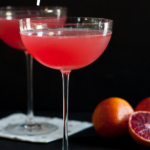 The blood orange vesper martini is a dramatic cocktail inspired by a James Bond love story.

When it comes to this time of year and the focus on all things pink, red, and love, I think of James Bond. I know,how romantic, but follow me here. If you put his vices and tendency to get himself into dangerous situations aside, James Bond exhibits qualities one would find really attractive: he’s a sharp dresser, exudes confidence, is witty, and has an uncanny sense of knowing exactly what to do in any given situation. Despite his reputation as a womanizer, James Bond is also a man who knows how to fall in love, and that is the inspiration for this drink. I take you to the first James Bond novel, Casino Royale, and the story of the Vesper martini.

As a relatively new MI6 agent, James Bond is nervous as he prepares to bankrupt Le Chiffre by gambling. While at the bar, he specifically asks for a dry martini served in a deep champagne goblet with the following ingredients: three parts of Gordon’s (gin), one part vodka, half-part of Kina Lillet (fortified wine), garnished with a long lemon peel. His friend, the American operative Felix Leiter, admires the drink and asks if it had a name, but Bond did not have one. It’s not until a little later in the novel that he calls it Vesper, naming it after the character Vesper Lynd, with whom he falls in love. Despite her fate, Bond’s subtle (and not so subtle) references to her in later novels show he never stopped loving her. So much so, he never requests or drinks a Vesper again, opting instead for ordinary vodka or gin martinis.

In trying to re-imagine the Vesper, I left the gin and vodka proportions the same. The Kina Lillet on the other hand, was a bit of a challenge. The name Kina hails from the name quinquina, a quinine liqueur from the bark of a Peruvian plant. This bark liquor is 15% of Kina Lillet, giving it a distinctly bitter taste. The remaining 85% is a blend of Bordeaux region wines. However, the company stopped manufacturing Kina Lillet in 1985, as consumer tastes changed. The recipe was altered to remove the Kina and much of the bitterness. Lillet is now sold in Blanc, Rose, and Rouge varieties, but none would provide a replica of the James Bond Vesper cocktail.

Because of this change, and the time of year we’re posting the recipe, I thought it best to replace the half-part Kina Lillet with half-part Gran Marnier and one part blood orange juice. The two ingredients provide an element of bittersweet flavor as tribute to Kina Lillet and the resulting color of the drink is rather fitting for Valentine’s Day. Of course, you don’t need Valentine’s Day to have this drink…you could just be reading a spy novel or watching your favorite 007 movie.

As with all alcoholic beverages, only consume if you are of legal drinking age and please enjoy responsibly!

I love this! I've never read any of the James Bond novels (movie girl, here) but I would hazard that his womanizing stems from the loss of his love. Excuse me while I go whip up this cocktail and crack open a Bond novel!

I'm such a big Bond fan too, and he's somehow who can carry off even a pink drink in style! Looks delicious!

Now this is my kind of drink, I love blood oranges and Grand Marnier, perfect!

You know what... I have never drunk a martini of any description despite being rather fond of a 'tipple or two' it's one of those things that I have never ordered, this sounds delicious.