Our first year married, we were living in Georgia and wanted to make a fun meal to “celebrate” St. Patrick’s Day. Neither of us are Irish despite the Godfather’s skin color and freckles after 5 minutes in the sun. We heard about the celebrations in Savannah and dying the river green, but the drunken bar scene is far from being our thing and we wanted a low key alternative we could just do at home.

So we looked for recipes, but corned beef is expensive around this time of year! Seriously. And on a “just starting out” budget that was not happening.

Stew beef on the other hand, some fresh vegetables, and a 6-pack of Guiness, we could do that. Those ingredients are far more versatile than corned beef, this soup is a meal on its own, and I could use the Guiness to make what would become my famous “Irish Delight” (aka “car bomb”, cupcakes) with leftovers for the Godfather to drink! We found out when we moved to California word of my cupcakes preceded our arrival. 😉

The trick to getting a really good rich stew is to brown your meat (it looks nicer and helps lock in flavor), and then let all the ingredients simmer together an hour and a half to two hours so the meat is fall-apart tender and the flavors have had time to blend. In a pinch, I’ve also made this in my slow cooker. I brown the meat and then place it in the slow cooker with the other ingredients and let it cook all day over low, or 3-4 hours on high.

Some variations I’ve made over the years include omitting the tomato paste. The soup tastes great without it, so if you don’t like a slight tomato flavor, don’t worry about it. I’ve also added potatoes some years in addition to the other vegetables. This year I didn’t because I planned to freeze a portion for later, and I don’t like frozen potatoes in soup. So feel free to add your own spin. You can also substitute any stout beer you have on hand (grab extra to make some of the brownies I just linked to!). The flavor profile of the beer will change your stew slightly, but as long as it’s a beer you enjoy drinking, you’re good.

This easy Guinness beef stew is also great to make for a big crowd. Stew in general is good to feed a crowd as the ingredients are relatively inexpensive. The alcohol cooks completely out of the soup too, so no problem serving it to kids. 🙂

So may your troubles be less and your blessings be more, and nothing but happiness pass through your door! 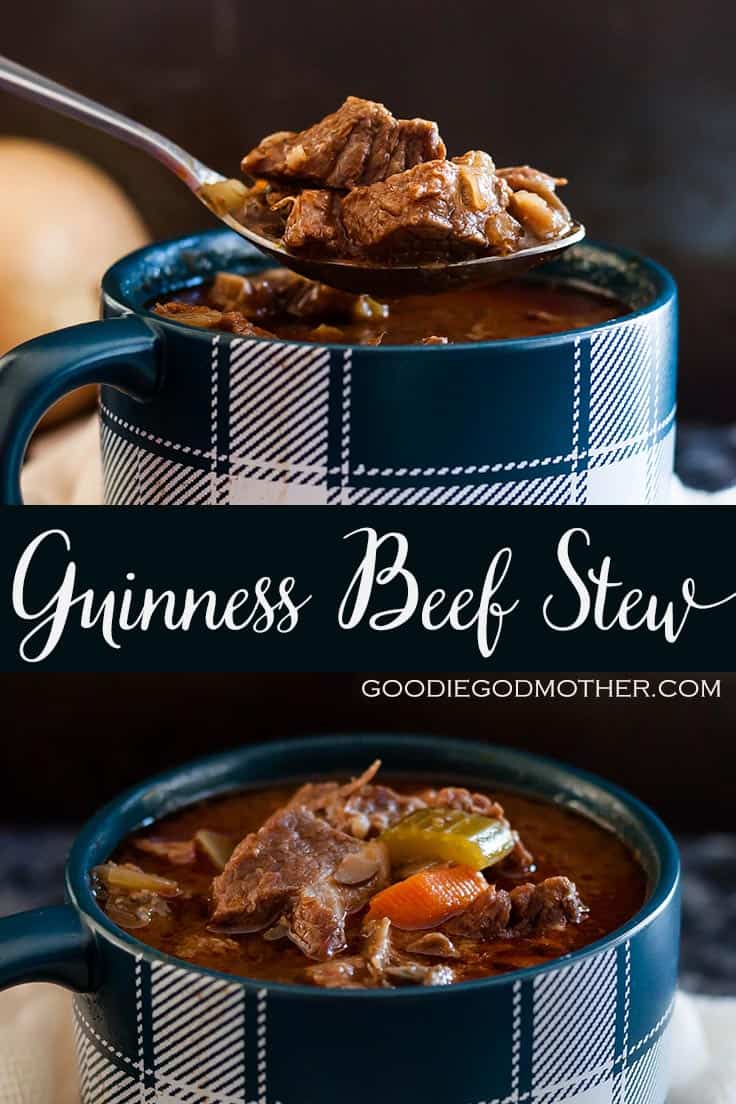 This looks so good Mary! I may have to forget the predictable corned beef and try this out instead for St. Patty's Day. Or maybe both! You've inspired me!

Thanks for sharing with us on the Momma Told Me Link Party! We love when you stop by!

Thanks! It's always fun to visit and see what everyone's been up to! :)

Bintu @ Recipes From A Pantry

I would love to just dig into a bowl of this stew right now.

Very topical with St. Patricks day nearly up us. Nothing like a bowl of stew to warm the cockles of your heart huh?

My hubby would be all over this one :) I don't eat beef, but he loves it so I will pin for him!