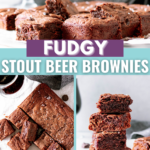 Rich and chocolaty, these fudgy stout beer brownies are different than typical cake-like beer brownies! The stout is cooked down and is used for flavor, so you can serve these decadent brownies anytime.

Raise your hand if you’re a fudgy brownie person over a cake brownie person. Mine was up. We can put them down now. This beer brownie recipe is for us.

I find that so many beer brownies have a cake texture, which makes sense. Beer is great to use in baking, and because of its characteristics, it adds lightness and flavor to lots of recipes.

We are no stranger to cooking with beer here! Just check out my recipe for a chocolate caramel pretzel beer cake, famous Guinness cupcakes, no-yeast beer bread, coffee stout beer cookies, and even beer waffles! I bake with beer.

But do you notice what isn’t on that list? Brownies. It’s not that I hadn’t baked them, the texture just wasn’t my favorite. The results were more like chocolate cake than brownie.

This year though, I finally cracked the code! The resulting fudgy stout beer brownies are dense, rich, and unapologetically chocolate! The beer flavor shines through just enough to balance everything.

I know they’re good because both the Godfather and the kids gave me a hard pass on sharing the brownies. Instead, the family ate the entire pan over the course of a little under a week.

Since the brownies contain beer, do they contain alcohol?

Not at all. You see, alcohol evaporates very quickly when exposed to heat. We take a 16-ounce can of beer and simmer it until it reduces to a half cup.

At this point, every tiny bit of alcohol and most of the water has evaporated! So in theory, once your beer has been reduced, you could drink the entire thing in a gulp and it would be like a very strange flat soda.

Please don’t though. It’s a terrible idea and you should save the reduced beer for your brownies.

What kind of beer should I use?

For this recipe, you’ll want to use a stout beer. Stout beers, regardless of brand, have natural coffee undertones thanks to the malt. This is why stouts are so popular for baking. The flavor profile compliments chocolate perfectly!

Around Saint Patrick’s day, use Guinness to make fudgy Guinness brownies. Many breweries also have seasonal varieties like chocolate cherry stouts, coffee stouts, gingerbread stouts, or the macchiato stout I used for the brownies for the shoot.

Since this brownie recipe has been a long time work in progress, I’ve tested using a variety of stout beers. As a general rule, if it’s something you’d drink, it’s also good for cooking.

If you don’t have a stout, you can substitute with a porter, but the beer flavor will be lighter as porters aren’t as robust. This article by The Kitchn has a good comparison of the two if you’d like more detail.

Unlike most of my other brownie recipes, these take a little more time. The extra time is because of the beer.

It takes approximately 20-25 minutes of simmering to reduce 2 cups of beer to a 1/2 cup. Then, you have to let it cool for about another 15-20 minutes so you don’t accidentally scramble the eggs in the batter. It doesn’t have to be totally cool, slightly warm is okay.

SO, if you don’t plan to be in the kitchen doing other things while all this is happening, you can reduce the beer in advance. I’m often interrupted while baking, so have done this many times.

Refrigerate the reduced beer and come back to it later when you’re ready to mix up your brownies, up to 2 days. If you can, let it sit out for a few minutes until it’s closer to room temperature. As with most baked goods, ingredients close to room temperature provide the best results.

To really amp up the chocolate flavor in these brownies, we use a ganache in the batter. You can make this ganache after reducing your beer, while it’s cooling. In fact, by the time the ganache is cool enough, the reduced beer should be good too.

After baking, wait at least 30 minutes to cut into the brownies. This will be challenging because the house will smell AMAZING! But if you’ve ever made fudgy brownies before, you know a little patience pays off. You need to give the brownies enough time to set so you can cut them into clean squares.

Finally, I recommend adding a sprinkle of coarse salt to the brownies. The coarse salt balances the sweetness. I also think it highlights the flavor notes from the beer.