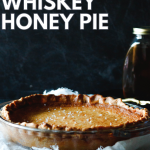 Sweet and salty with a little kick, this salted whiskey honey pie is an easy single-crust pie recipe. Pair this dessert with your favorite fruit, or a simple dollop of whipped cream!

It’s the first installment in The Year of Pie! Late last year, I decided I wasn’t baking nearly enough pies. So this year, the plan is to share one new pie recipe every month! It could be sweet or savory, and anything pie-like like a tart or hand pies totally counts. And we are kicking off the party with this salted whiskey honey pie!

I did not come up with this recipe or the idea of a honey pie at all. The first mention I’d encountered of a honey pie was in an old cookbook at a museum. The idea sounded interesting, but it went on the “recipes to try” pile for a while.

This wasn’t even supposed to be this month’s pie recipe! I just misread my own notes and ended up THROWING AWAY AN ENTIRE PIE. Darlings. It was almost devastating.

Because before I could properly process everything and get in my feelings, I saw… honey! Which, of course, reminded me of this recipe, and armed with a thawed frozen pie crust, all was right in the world again.

What is a honey pie?

Honey pie is a single-crust pie recipe with a custard-like filling. The filling is sweetened with a combination of both sugar and honey, with the exact ratio varying by recipe.

Honey pie filling is slightly creamy since most recipes call for either heavy cream or sour cream. Egg is used to provide structure. The filling is not light like a cheesecake, but more like a baked tart. It reminds me of a pecan pie without the pecans.

What does a salted whiskey honey pie taste like?

The predominant flavor in this pie is the honey. I recommend using medium-bodied honey. If you use honey with a really light flavor, it will disappear in the pie. A very dark and bold honey might be overpowering for some. Something right in the middle in terms of flavor is good. I used local wildflower honey, which was really good.

The whiskey in this recipe is optional. I included it after talking to the Godfather. I told him I was going to make a honey pie instead and asked if I should add anything else.

My original thought was to make a lavender honey pie and throw a 1/4 teaspoon of culinary lavender into the recipe. He vetoed that and suggested a bit of whiskey instead.

Because I’m a nice wife (most of the time), I decided to try his suggestion first. The whiskey was a very nice addition! All the alcohol bakes out, so it’s just like using any extract. If you don’t have a whiskey or a dark rum on hand, you can skip this ingredient.

As an alternative, you may increase the amount of cream in the recipe. Or, add a little lemon juice. Honey and lemon are a beautiful and classic combination. This pie has so many possible variations!

The lavender will happen one day, I think it’s a great idea.

To cut the sweetness, a sprinkle of coarse salt is added as a finishing touch before serving. If you’d prefer, you can skip the salt.

Use a large-grain finishing salt like Maldon sea salt or fleur de sel. A smaller grain variety of salt, like what you’d use for cooking, won’t give you the same effect.

If you do skip the salt, I suggest serving the pie with a little dollop of whipped cream to help provide contrast to the bold honey flavor.

You can use whatever pie crust you’d like here. I have a lovely recipe for a flaky all-butter pie crust here, but I used a store-bought rolled crust for this because it’s what I had on hand. A pre-formed crust in a disposable pan will also work really well.

For the blind baking, you’ll need to use pie weights. Blind baking means that we par-bake or partially bake the pie crust before we add filling. This keeps the bottom crust crisp and prevents overbaking the filling.

The easiest way to blind bake is to place parchment or foil paper over your pie crust and then fill it with pie weights, a pie chain, or dried beans. If you don’t bake pies often, the beans work perfectly and you can still cook them later. I used this trick for years before I bought weights.

Bake the crust with the weights for a few minutes, then carefully lift out the big piece of aluminum foil or parchment and the weights. If your crust has bubbled anywhere, prick the bubble with a fork to gently flatten it for the remainder of the baking time. It sounds fussy, but it’s easy to do.

While the parbaked crust is resting, whisk up your filling, then pour it into the still hot crust for baking. As long as your filling ingredients are room temperature and your crust is still warm, you shouldn’t have any issues with separation.

It is much easier to slice the pie when it’s cold though. So if you’re looking for clean cuts, chill first.

The extra pie can be stored in the refrigerator up to 3 days, loosely covered.

I hope you love this recipe, darlings! I’m so excited to kick off this series and share some new pie recipes with you this year. Happy baking!