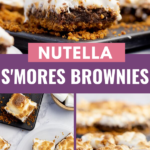 Quick! If you had to pick one… cake or brownies? Go! Have you picked yet? If your answer is “what!? We don’t choose, you crazy woman!”, you are my people. But you are also my people if you picked just one… especially if that one is brownies. Because I’ve spent probably too much time thinking about this set of alternatives. I think my choice would be brownies. Especially if they’re THESE Nutella s’mores brownies! Love at first bite, for sure.

I don’t know if it’s the graham cracker crust that makes this so perfect, the fudge-like Nutella brownie center, or the toasted marshmallow. Something about all of these makes these brownies a dish I look for reasons to make.

It’s pretty clear looking at the blog that brownies are a favorite here. I have hot chocolate brownies, peanut butter brownies, toffee espresso brownies, and more! There are a few more on my “to make” list too. It’s funny, for not being chocolate obsessed, I am brownie obsessed. And I know I can’t be the only one.

Time for a quick poll…

Raise one hand if you love brownies. Raise another if you love Nutella. Raise yet another if toasty s’mores are one of your idea treats. Wait. Too many hands. How about instead, we put all hands down and I’ll just tell you about these dreamy Nutella s’mores brownies and then we all go bake a batch? Sounds like a good plan to me too.

Recently, Princess A has been all about toasting marshmallows outside on our fire pit. The Godfather and I have been happy to oblige because it’s fun. We enjoy the family time, and since we usually plan family fire pit evenings on Fridays, it’s a nice way to wind down the week. I’ve been using the opportunity to teach the girls a little more about open fire cooking. They’re still very young though, and all about toasted marshmallows. S’mores or just plain toasted marshmallows are always on the menu.

I was preparing for one of these evenings when I saw a jar of Nutella in the pantry, and I just knew. I had to make brownies – Nutella s’mores brownies to be exact.

On their own, most Nutella brownie recipes are fudgy, chewy, and rich. But when sandwiched between a layer of graham cracker crust, and topped with toasted marshmallows… they’re still fudgy, chewy, and rich, haha. But now we have all the flavors of a Nutella s’mores and we didn’t even have to break out the kindling.

Pro tip: Open fires are not approved at the office for sharing s’mores with your co-workers. Nutella s’mores brownies on the other hand, do not break any local fire code regulations.

The easiest way to cut these brownies is to use a bench scraper. A knife will also do, just wipe between each cut. Since the marshmallow layer is sticky, I recommend spraying your cutting utensil with nonstick spray or brushing with butter as needed to maintain clean cuts.