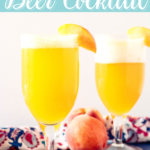 Cheers to easy summer cocktails like this peach shandy beer cocktail recipe! Beer makes a perfect pairing for fresh peaches in this drink recipe perfect for a BBQ or day by the lake.

Have you ever tried a beer cocktail, darlings? Beer makes an excellent base for simple cocktail recipes. Just by adding an extra ingredient or two, you have a great happy hour recipe. Mix it for 2, as I did here, or double the recipe and mix up a pitcher for a party. Either way, you’ll love how beer makes the perfect mixer for summer’s fresh peaches!

What is a shandy?

The first time I heard of a shandy, I thought it was either a type of dance or building. Clearly, both guesses were wrong. A shandy is a beer cocktail made by mixing beer with a lemon or lime beverage.

The most basic shandy recipe is a 1:1 mixture of lemon-lime soda or lemonade and beer. Not a dark beer, obviously, but whatever light-colored beer strikes your fancy. Think along the lines of sparkling lemonade, but some places make it with non-carbonated lemonade.

These drinks are popular in Europe, Canada, Australia, and New Zealand, but they’re definitely gaining in popularity here in the United States. Try one and you’ll understand.

If you’d like to learn how to make a traditional British shandy, Christina’s Cucina has a good post and recipe!

I recommend the recipe at the bottom of this post even though it’s not entirely traditional. Personally, I think it makes it more accessible as even people who don’t typically go for beer might enjoy it!

Oh, and you can make this non-alcoholic! A rock shandy is a shandy made with non-alcoholic beer, which you can absolutely use in this recipe too if you’d prefer a mocktail.

How to make a peach shandy beer cocktail…

Thankfully, you don’t need to head to your local pub to make your own shandy cocktails! You can mix one up in no time at home, and get really creative with flavor variations! For example, this recipe was inspired by fresh summer peaches and a peach mango beer from Devil’s Backbone Brewing here in Virginia.

Instead of using juice or lemonade as our mixer, we make a peach slurry and mix it with ginger beer. Peel and slice a fresh peach and place it into a blender. Fresh peaches blend up really smooth, so don’t worry about any weird textures.

There are a couple of ways to peel a fresh peach, but as I discuss in my peach cobbler recipe, I just use my serrated peeler.

To help your peach blend nice and smooth, add a bit of simple syrup. Simple syrup is a 1:1 mixture of water and granulated sugar. You heat the water until the sugar dissolves, cool, and store it in the refrigerator for a week or so. Most stores also sell prepared simple syrup next to the grenadine in the mixer section.

While peaches are pretty sweet on their own, the bit of added sugar provides balance. It’s similar reasoning to why we add sugar or a sweetened drink to most sangria recipes.

For science, I did make this without simple syrup and just added a bit of sugar and water to the blender with my peach. That worked too. Just blend the mixture for about an extra 30 seconds to give the sugar a chance to really dissolve. So if you don’t have simple syrup on hand and don’t want to wait to mix up your shandy, here’s your easy workaround!

Once you’ve made your peach slurry, divide it between 2 glasses, then pour in your ginger beer and beer. Angle the glasses so you don’t end up with a huge amount of head in the glass. Look at what happens if you don’t and try for pour shots *facepalm*…

Then serve and enjoy!

What’s the difference between ginger beer and ginger ale?

This is an important question because there’s a big difference! Both are non-alcoholic soft drinks and are easily purchased in the soda section of any grocery store. The difference is in the production methods.

Ginger beer is brewed using actual ginger and has a very bold ginger flavor. It’s great in this recipe because we use no lemon. A traditional shandy has a lemon kick to compliment the beer. We replace the acidity of the lemon for this recipe with the spiciness of ginger.

Ginger ale, while having a ginger flavor, is not made with actual ginger. It’s milder and sweeter. You can us it in the recipe if it’s what you have on hand, but the ginger beer will give you the best results.

What kind of beer should I use?

As mentioned earlier, you’ll want to use a light beer. Save your porters and stouts for chicken wings or brownies.

Good beer options include lighter ales, pilsners, or wheat beers. This recipe was completely inspired by a summer seasonal brew that has peach flavor. So if you find one of those, go for it! Otherwise, just about any beer you’d reach for in summer weather would work, barring a super-hoppy IPA.

Can I scale this peach shandy beer cocktail recipe to make a pitcher cocktail?

Yes, you can! Just double or triple the recipe as needed for the number of servings desired. Don’t add the beer until you’re ready to serve. Since it’s a carbonated beverage, you don’t want it sitting around too long or it will go flat.

Another option is to make a triple or quadruple batch of the peach slurry and allow everyone to mix their shandys to order. That way, the beer stays cold and carbonated, but you aren’t playing bartender all night long!

It's a cross between a shandy and Bellini! You could call it a Shellini! :) Thanks for linking to my proper shandy recipe. So many others have got it all wrong (using American lemonade)!