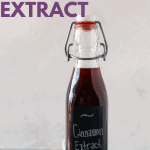 Homemade extract is a great way to stock your baking pantry and makes a beautiful gift! In this post, you’ll learn how to make cinnamon extract using just 2 ingredients.

I didn’t realize how versatile cinnamon extract would be until I made some! You know how when you’re browsing the baking aisle at the store, you see all the different extracts, but you pretty much stick to your usual? That’s me. I grab vanilla, sometimes almond or lemon extract, but that’s about it. Then this year happened and I’m on a serious extract making kick! Recently I shared a post (with video!) on making your own vanilla extract. But since I also make lemon extract, and now cinnamon extract, I’m going to share those too. You’ll find making cinnamon and lemon extract even easier than vanilla!

You only need 2 ingredients!

To make this extract, you only need 2 ingredients – cinnamon sticks and vodka. You can find whole cinnamon sticks in the spice section at the grocery store. Cinnamon can be found in two forms, typically. There’s ground cinnamon, which is what most of us purchase for everyday cooking and baking. You also have cinnamon sticks, which are great for things like oatmeal or Cincinnati-style chili. To avoid grit and powder in your extract, use the sticks.

The second ingredient is alcohol. If you don’t drink, don’t worry, any alcohol burns off in the baking. Alcohol is an ingredient in every extract because that’s what pulls the flavor from whatever you’re extracting. It’s a preservative, which is why homemade extracts are shelf stable. Clear, unflavored vodka, is perfect for cinnamon extract. You don’t need anything top-shelf, but for a smooth extract that blends well, try to avoid the cheapest option too. Somewhere in the “economical but not for industrial-strength cleaning” is good. That will give you the strongest cinnamon flavor in your extract. You don’t want other flavors in there.

How long does it take to make the cinnamon extract?

This is exactly why I love this recipe, especially for those of you new to making extract. You can have great cinnamon extract ready to use in as little as 6 weeks! To get vanilla extract in that amount of time, you have to use a lot of beans, and it still won’t be at its very best. Cinnamon sticks – especially if they’re pretty fragrant – infuse the alcohol quickly!

First, gather your ingredients and a clean glass container. A mason jar is perfect. I prefer to start my extract in a wide-mouth mason jar and then transfer to a pretty jar for storage after I’ve removed the extra cinnamon sticks.

Place 4 cinnamon sticks (or as many as will fit) into your mason jar. Pour in enough vodka to cover the cinnamon sticks. Place the lid on the jar and set in a pantry. Shake every week or so if you feel like it, but it’s not required. In 4-6 weeks, open the lid and smell. If your extract smells potent enough, transfer your cinnamon extract to a pretty jar.

Unlike vanilla beans, which you can leave in your extract jar indefinitely, cinnamon sticks can taste bitter if steeped in the vodka too long. They also turn bitter if overcooked. Since we don’t want bitter extract, pull the sticks once your extract has reached the appropriate strength. You’ll know by smell and color – it will be a lovely rich brown and very fragrant.

How can I use cinnamon extract?

Basically anywhere you would use vanilla extract, you can use cinnamon extract.

I do hope you’ll give it a try, darlings! Enjoy!

What if some of the cinnamon sticks float at the surface?

It should be okay as long as they don't dry out. The alcohol preserves them and should still give you great extract. If you'd like, give the bottle a shake when you remember every few days.

As long as it's in stick form and not ground, yes. As with most things for extract making, what you enjoy eating will make a delicious extract. To help the flavor of your chosen cinnamon really shine through, just stick to a neutral-flavored liquor like vodka.

You do have to be careful when using cinnamon extract in place of vanilla extract in a cupcake recipe. The cinnamon will react with the baking powder and your cupcake won't rise like it should.

I've never substituted 100% of the vanilla for cinnamon, so I didn't know that! Thank you for sharing!