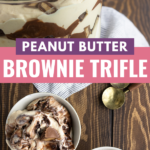 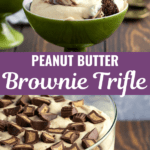 Nothing goes together like chocolate and peanut butter! This fabulous trifle, with its layers of brownie, chocolate pudding, peanut butter whipped cream and mini peanut butter cups, is a perfect, crowd-pleasing dessert.

Darlings *eyebrow wiggle here* did you know this peanut butter brownie trifle recipe happened because of LEFTOVERS??? Yup. And it’s glooooooorious. But we knew that already because brownies.

Story quickly, then recipe chat. Basically we were hosting a party (our annual pig roast) and I was baking lots of easy desserts. 3 large trays of brownies were part of the spread. But everyone got SO excited over the caramel stuffed mocha chocolate chip cookies, that I had about a tray of brownies left. So I made a chocolate trifle. And it was so good, I blogged it. And we all lived happily ever after. Now let’s talk trifle…

As I said before, I used leftover brownies for this recipe (the first time). In general, trifles are a good way to use extra anything! But if you’re reading this, you’ll likely need to bake your brownies. I’ve included an easy recipe below. Feel free to swap your own, or use a box mix. If using a box mix, I’d recommend getting the family size mixes for the big pans. That way you will have plenty of brownies for your layers.

The kind of brownie doesn’t really matter. If you like cake type brownies, use those. Fudge brownie person? Use those. Honestly, even something like a chocolate pound cake could work here. It’s a peanut butter and chocolate trifle recipe. Get the general flavors in there and there’s room for variation. But I love the texture of brownies over cake in this particular trifle, and I think you will too.

The next layer in this fabulous brownie trifle recipe is… chocolate pudding. Make it from scratch, use a box, do you. I’ve done both. It depends on my mood and if I have a box of chocolate pudding in the house. There is no right answer here other than do what works for you. A basic chocolate pudding recipe is included below. Since pudding needs a little chilling time to set up, you can make the chocolate pudding a day or two in advance and store in the refrigerator. If you’re making this peanut butter brownie trifle for a party or something, splitting the work over a few days is always a good idea.

Now as a totally optional addition that I recommend, add some of the mini peanut butter cups! I buy the bag of miniature peanut butter cups that aren’t individually wrapped. Some grocery stores have these in the baking section, but I usually find them in the candy section. The peanut butter cups in this bag require no unwrapping – a bonus for lazy bakers like me. The smaller size also helps keep each bite of trifle manageable.

My approach to eating trifle is to try each little bit individually, then combine the layers on my fork or spoon to try the different combinations. At least one bite of everything together is a requirement. Once you pile brownie, chocolate pudding, and peanut butter whipped cream on a fork, there’s not a lot of room left for a huge piece of candy. The little miniature cups on the other hand, are perfect when cut in half.

As for serving, I usually build my trifle in a trifle dish. But if I were planning to serve this somewhere a bit more formal, I’d probably use clear disposable cups to make cute mini trifles. Mini trifles are easier for people to just grab and eat, kind of like cupcakes to a cake. Think about what works best for your situation, and use that. If you don’t own a trifle dish, you can use a deep glass bowl, or make a shallower trifle in a casserole dish.

Whether you are looking for an easy dessert for a potluck or party, or just another tasty peanut butter and chocolate dessert recipe, I hope you’ll give this peanut butter brownie trifle a try. Enjoy, darlings!

Baking the Brownies (make in advance):

Make the Peanut Butter Whipped Cream and Assemble the Trifle: