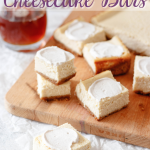 Creamy, delicious, and flavored with real maple syrup, these maple cheesecake bars are a delightful dessert. Top with cinnamon whipped cream for a truly amazing treat!

Last year, I made a maple cheesecake for our Friendsgiving celebration. We had almost 20 people over and I was in hostess heaven! As a feeder a hostess at heart, I adore having people over and getting to love on them a bit.

One of our guests was gluten-intolerant. Since one of the cardinal rules for being a gracious host(ess) is to know everyone’s preferences and have options available, I wanted to be ready! Of course, we were going to have some homemade truffles and macarons, but there needed to be more!

So I used the pecan crust from my gluten-free pumpkin cheesecake and made a maple cheesecake filling instead.

It might have been one of my favorite desserts of the night.

So I spent the rest of the year swearing to the Godfather that I was going to make it again. And yet, it took almost a year! And when I was about to bake, I realized I was short a few ingredients. Oops.

I was out of pecans, and didn’t have enough cream cheese for my famous sky-high cheesecakes.

This recipe just couldn’t wait any longer though! So with a few modifications, we have… maple cheesecake bars!

Yes, all the exclamation points are totally necessary. I’m not going to apologize. Love you!

The recipe is pretty straightforward, but I have a few tips for you to help you achieve perfect, creamy cheesecake bars. Bars are actually a great place to start if you’ve never made cheesecake before because they’re a bit less fussy.

First, the crust. It’s a classic graham cracker crust, BUT I have a few suggestions for you. If you have maple sugar, and you want a bold maple flavor, I totally recommend using maple sugar instead of brown sugar.

Maple sugar isn’t something most of us have in our pantries though, so brown sugar works perfectly. It does add a little more maple flavor. We’ll talk about this a bit in the next section.

I’d also suggest taking your eggs out 10-15 minutes before mixing and the sour cream. The maple syrup might be a good idea too.

I’ve literally forgotten to take out the maple syrup every time I’ve made maple cheesecake though and it hasn’t mattered.

Greek yogurt can be swapped for the sour cream. The best texture will come from full-fat yogurt. I have used fat-free in cheesecake bars before though, and they still turned out quite good. There is a slight difference in texture, but most people won’t notice.

To cut down on dishes, I usually mix with a hand mixer and a large mixing bowl. Choose your adventure!

You can make cheesecake bars in advance!

It’s best if you make these the day before you plan to serve so there’s plenty of time to chill! The maple cheesecake bars are easiest to cut when cold.

If you’re planning to serve these with a holiday meal, then this definitely saves you a bit of time on the day of the big feast. Bake your bars a day or two before, refrigerate, then cut and serve!

Cheesecake bars are seriously one of the best ways to serve cheesecake to a crowd. So much easier than letting people slice away at a round cake. Trust me.

What kind of maple syrup should I use?

Darlings, for these bars, you’re going to want to use real maple syrup for the best flavor. The “breakfast syrups” aren’t going to shine through in quite the same way. You can use them, of course, but if you can use the real thing, it’s so good!

Maple syrup sold to consumers is labeled by color: Golden, Amber, Dark, and Very Dark. The golden and amber have a more delicate flavor, while dark and very dark are bolder and more robust.

I’ve made this with Amber and Dark. With the amber maple syrup, the maple flavor was light. It was still there, but I couldn’t clearly say “maple!” until the day after the bars were baked.

On the other hand, the dark maple syrup was perfect! Because I wanted a bold maple flavor, this was my favorite.

BUT, both were really good, so use what you have. I just felt it was important to include this section because we noticed a big difference in flavor. And since I want you to get exactly the result you want, these notes will hopefully help. 🙂

What about the cinnamon whipped cream?

Originally, the whipped cream wasn’t part of the plan. But as I was photographing, the bars just felt like they needed a little something.

This batch was also the batch where I only had amber maple syrup on hand, so I wanted to add something that would help coax out the maple flavor a bit more. The cinnamon whipped cream was PERFECT!

You may choose to spread the whipped cream on for a rustic look, or use an open star tip to pipe pretty dollops. There is no wrong way to do this. If you have extra whipped cream, it’s perfect on pies, ice cream, or fruit.