Mexican Pork Tamales are a traditional Christmas food – although they are enjoyed year round! Gather friends, host a tamalada (tamale rolling party), and enjoy! 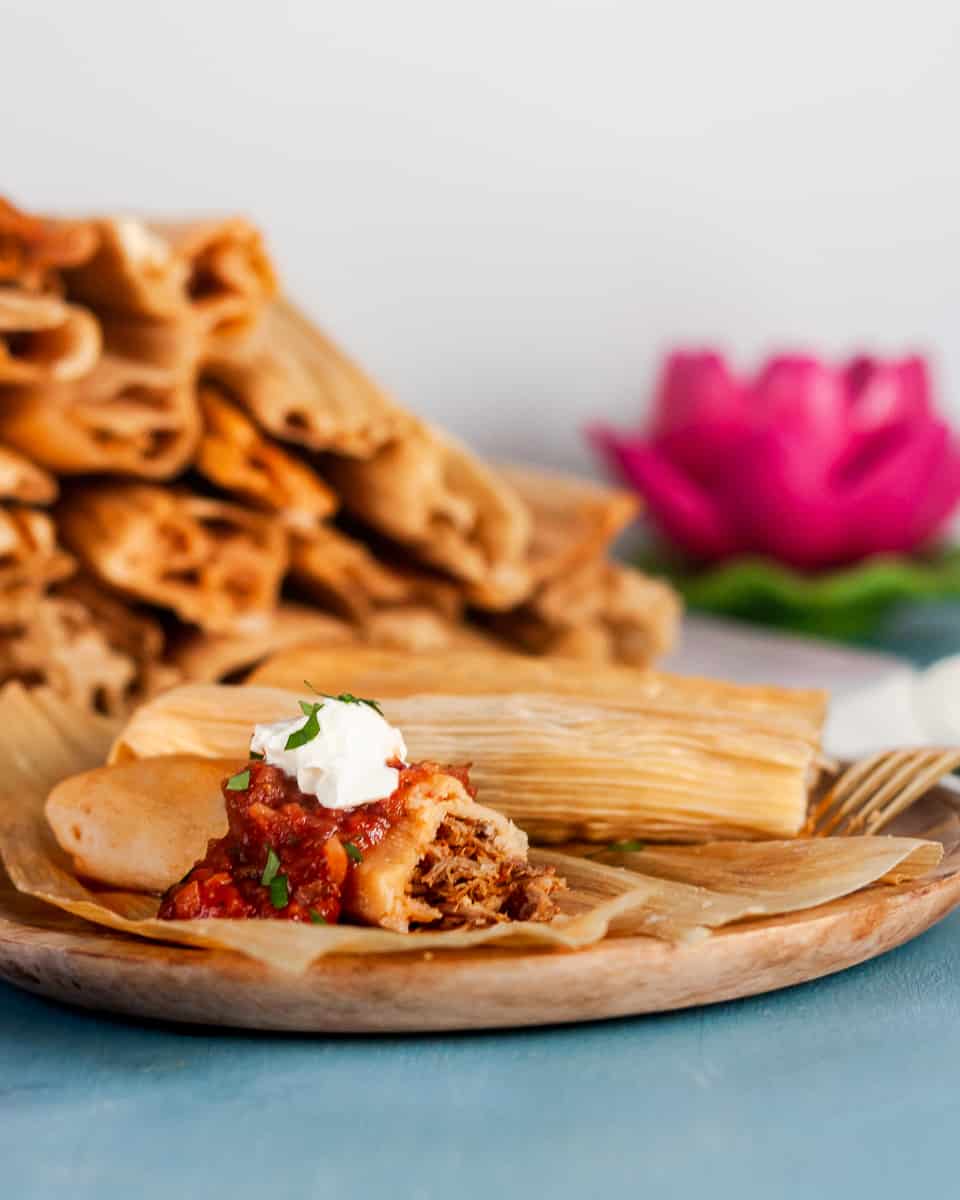 We discover a lot of food on our travels. As some of you may have gathered, we travel a good bit both for the Godfather’s job and just on our own for fun. We’ve taken two cross-country road trips so far, and between those trips, we had a sojourn in central California where we were introduced to Mexican food (and its incredible varied regional styles). Growing up in South Florida, Taco Bell was pretty authentic, so this was an exciting discovery!

One of the new foods added to our lives was the tamale. Previously, we had only tried the Caribbean banana-leaf-wrapped style and just seen the smaller corn-husk-wrapped versions on Food Network travel shows. You can imagine my excitement when I made not one, but 2 friends who made tamales. I had two beautiful friends in California who both made tamales, each with their own style – one a native Texan who seasons the masa so well you could really probably just cook that and eat it alone because it tastes so good. The other, a California native who lets the filling flavor shine through and swears each pork tamale must have a black olive or it’s not right. 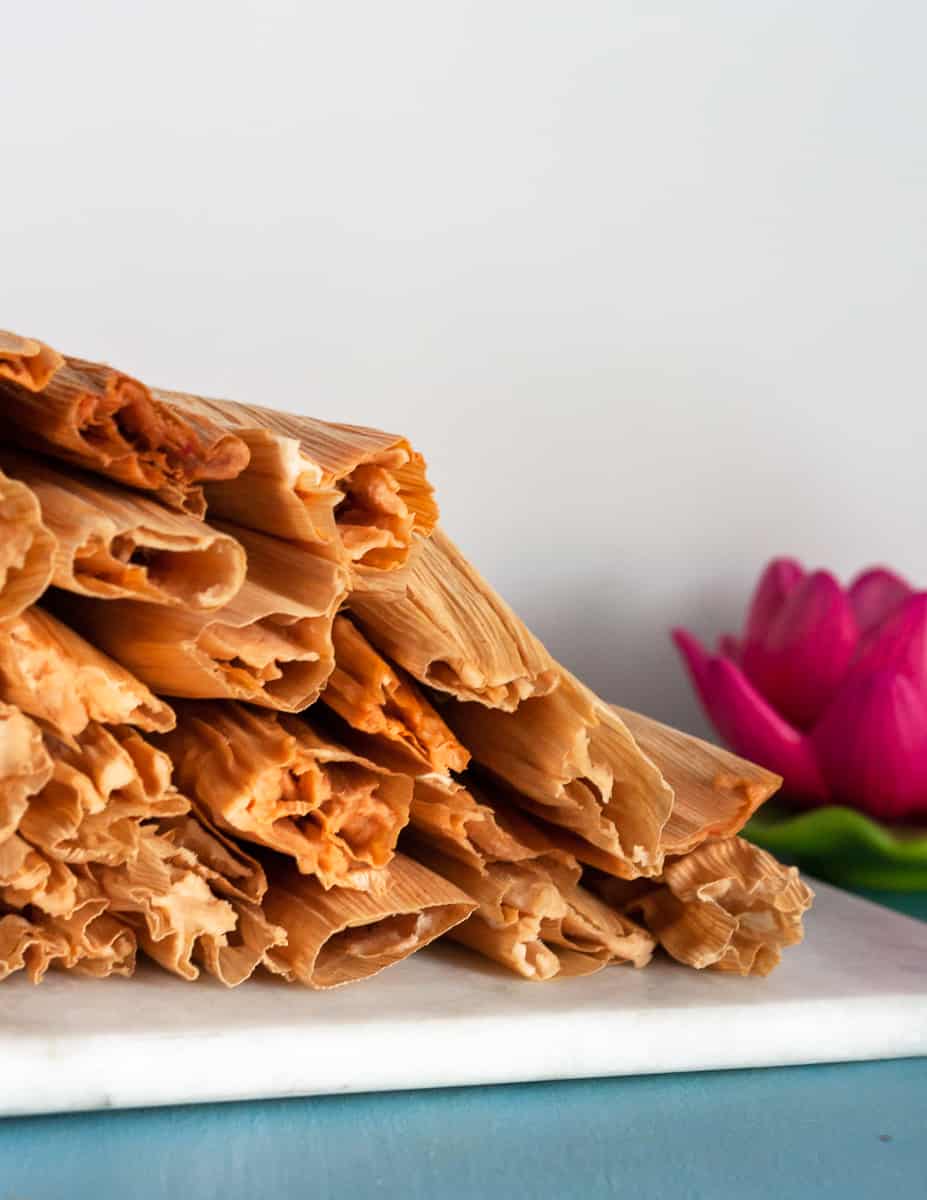 Tamales are traditionally made around Christmas time and serve as the main feature in the Noche Buena (Christmas Eve) meal. All the local restaurants and shops offer tamales for sale, just like pre-ordered turkeys at Thanksgiving, typically filled with chile verde pork or chile colorado (the “red sauce” pork we are making here). The best way to enjoy them though, is to get friends or family together, sit down, and have a tamale party, rolling, steaming, and sampling the fresh tamales between laughter and great conversation. 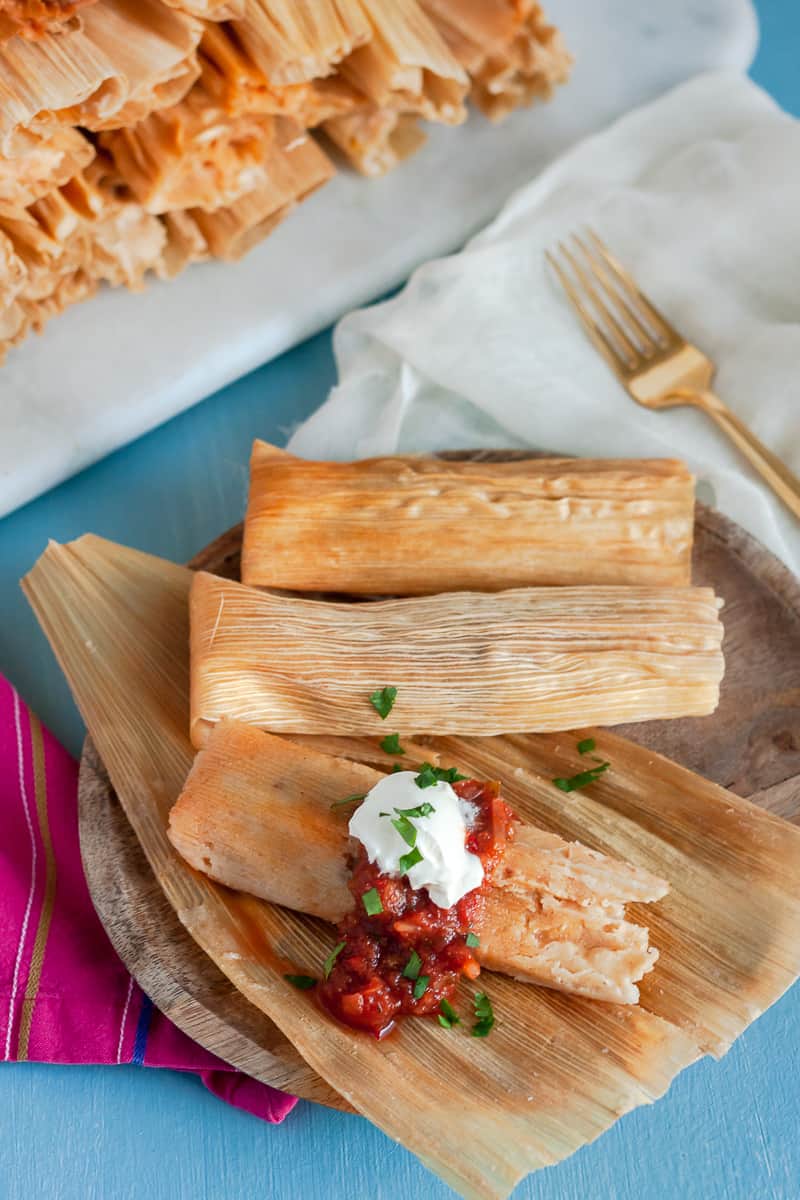 I think maybe that’s what drew me to make them this year and brave the process alone, right down to making the masa (something I would have *never* done in California with the number of tortilla shops and stores that sell freshly prepared masa). I have many family dishes I cherish because, even though I’m the only one that will sit and make them now, I remember being in the kitchen with my grandparents, mom, and sisters. I make them because they’re delicious, but I’m also making a memory, bringing back beautiful moments in a tangible way.

Tamales are sitting in a dining room with the J family making Texas-style tamales, getting laughed at for my awful newbie masa-spreading skills, watching their little daughter try to “help” and hearing stories about making these in Texas with family. They’re also a moment at a table in the Vandenberg community center at a tamale class telling M that all her tamales are wrong because they have no olives while L walks around checking on everyone while the happy hum of conversation buzzes and MH and T are sitting at another table making the most ridiculous tiny tamales ever just because they can. They’re also the memory of a quiet night at home, exhausted after bringing our little girl home from the hospital. I had some left in our freezer and in that new-parent haze, they were so incredibly comforting as one less meal I had to think about. And the Godfather wanted some, and when he requests, it happens. Simple.

This recipe makes somewhere around 6-8 dozen depending on how large you make the tamales. Tamales freeze rather well, so given the time investment, it’s best to make a big batch so you have some for now and some for later. I actually ended up with more masa than filling this time (smaller pork shoulder), and so I got to play a little. In addition to making tamales with pork, I made some filled with Cuban Ropa Vieja, and some with bacon cheddar and fresh chives… amazing.

The recipe is long, and may seem daunting, but you can absolutely break it up over a few days. I did, and everything turned out fine. Actually, I saved myself a good amount of time by using my slow cooker to prep the tamale filling. Have I mentioned I love my slow cooker? Certain things in life are just best if they aren’t rushed, like a good meal, visits with friends you haven’t seen in a while, that first kiss after you haven’t seen your sweetie in some time, and the coming of Christmas every year! See what I did there? Social statement. Christmas starts after Thanksgiving, none of this after-Halloween nonsense. 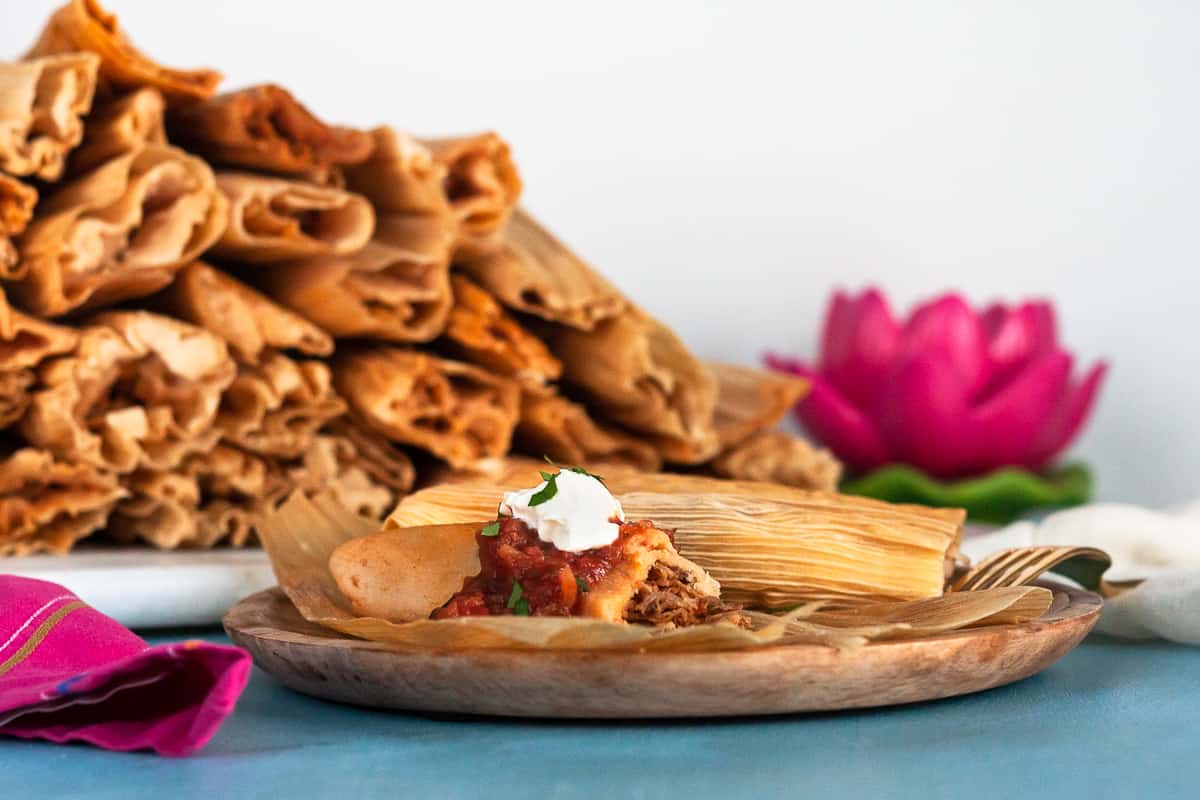 Anyway, when I did make the masa, I tried to save myself some work by starting it in my mixer (the big lift bowl one, not the smaller standard one), but it’s very thick, so after a little while, my mixer was not too happy with me and I decided to finish the masa by hand. The big bowl came in handy. If you don’t have a larger mixer, I would probably just do it all by hand in the larges mixing bowl you can find. If you don’t have a very large mixing bowl, use a stock pot. You can try to do it all with a spoon, but you’ll probably need to use your hands at some point. A quick note from your personal health department: Well washed hands are a given, but if you have long nails (as in anything not trimmed completely down) or painted nails, you must wear gloves when/if you do this.

I did a lot of research to try and find a good recipe and process to make the tamales I remembered, and ended up following most of the steps from La Cocina de Leslie with a few tiny modifications based on ingredients I could find, some recipe scaling, and preferences (because I put garlic in everything).

After all this practice, I’m feeling pretty confident about my tamale-making skills. I sent some to a friend via husband-exchange at the Godfather’s office and he was asked by someone else if his mom made the tamales because they looked like the ones she had as a kid. And making food like mama or grandma, my dears, is the highest compliment one can earn.

To roll the tamales:

- Chili Notes: I used arbol chilies (very spicy) and a mild chili that I don't remember. I had to remove some of the arbol chilies before I blended just because I didn't want the tamales to be too spicy. Ancho and guajillo chilies were recommended in the original recipe, and if you are able to find those, I would use them as both are rather mild and so you won't have to remove any.
- Cooking tamales without a steamer: You can absolutely cook tamales without a steamer! I use a metal colander in a large stock pot. I fill the stock pot with water level to the bottom of the colander, place my tamales in the colander, cover (the lid doesn't fit tightly but it's fine) and cook over medium high/high heat. Just check periodically as you might need to add more water towards the end of cooking time.
- Reheating Frozen Tamales If you freeze some of the tamales to eat later (and you will if you aren't feeding a crowd), be sure to wrap them in a wet paper towel before re-heating in the microwave.
- Filling Feel free to get creative with the filling if you have extra masa! Two ideas I used this batch - leftover ropa vieja (Cuban shredded beef), and bacon cheddar chive.