Dessert shooters make a fun and unique treat to take to a party. My no bake piña colada cheesecake shooters are the perfect mini dessert for summer fun! 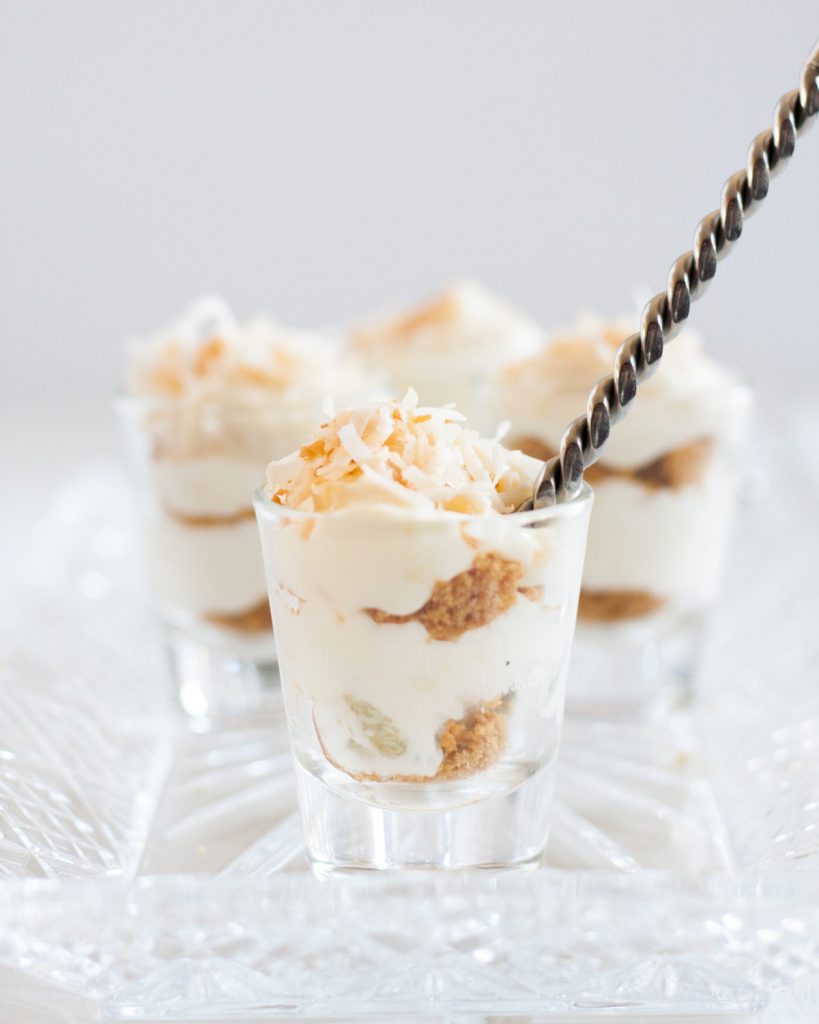 Some of my best ideas come after serious failures. My original plan was to make piña colada cheesecake bars, but clearly that didn’t work out. My first test resulted in bars that didn’t set. When I did get them to set, they weren’t pineapple coconut-ty enough for me, so we went back to the drawing board and I decided to make dessert shooters instead. We never sacrifice flavor for a “look”, darlings. I’d say this worked out even better than planned though, because dessert shooters look equally at home at a backyard barbecue and an elegant evening soiree.

My pina colada dessert shooters have all the flavor of a pina colada cheesecake with none of the work. Seriously. It takes 5 minutes to throw all the cheesecake ingredients into a bowl and mix. You can use a stand mixer, or hand mixer, whatever you have – by hand works too if you want to work up a bit of a sweat! 😉 Then mix the crust ingredients in another bowl and voila! Magic. Well, almost. You do have to fill the shooter cups. 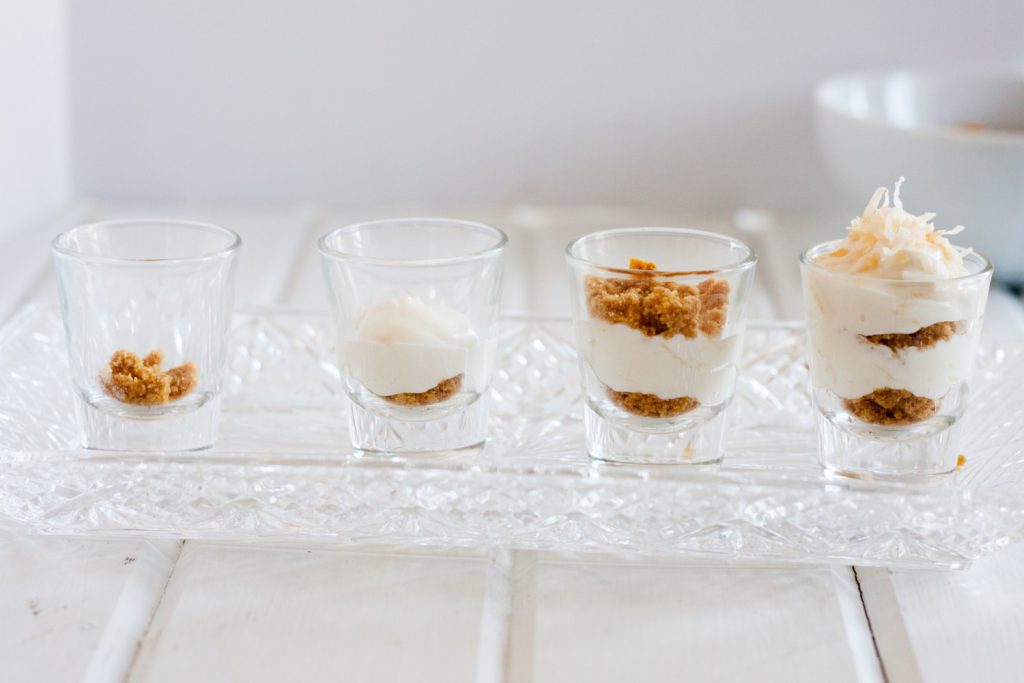 I like to use a piping bag because it makes the job very easy. Use a small spoon to drop in a bit of crust, pipe in a bit of the filling, spoon in another layer of crust, filling, and top. Done. Once you get your rhythm down, you can fill several dozen dessert shooter cups in minutes. 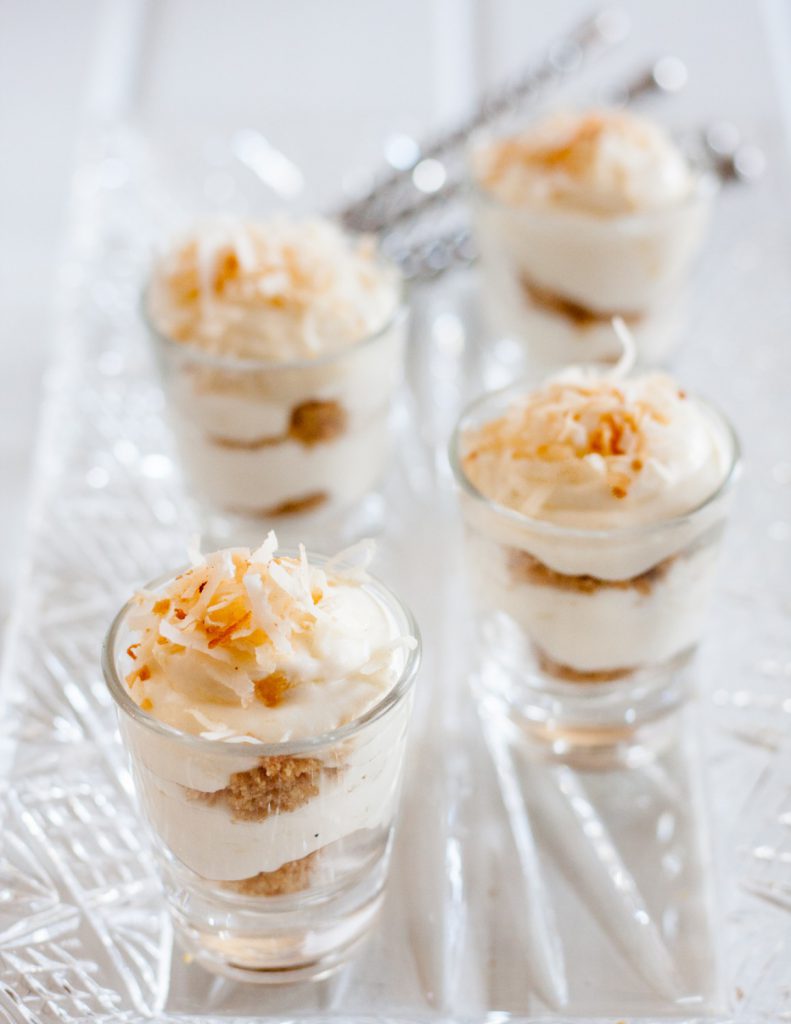 Speaking of shooter cups, you can find disposable miniature shot glasses at a party supply store or here on Amazon. Complete the serving set with mini dessert spoons. I used real dishes here, but you’ll see the disposables in action if you check out my tiki tea party tutorial. I’m very much in love with mini dessert parfaits this summer, clearly. If you’d prefer to just make one large dessert, layer your crust, filling, another sprinkling of crust, and filling in an 8″ square glass pan, you will want to show off the pretty layers after all. 😉 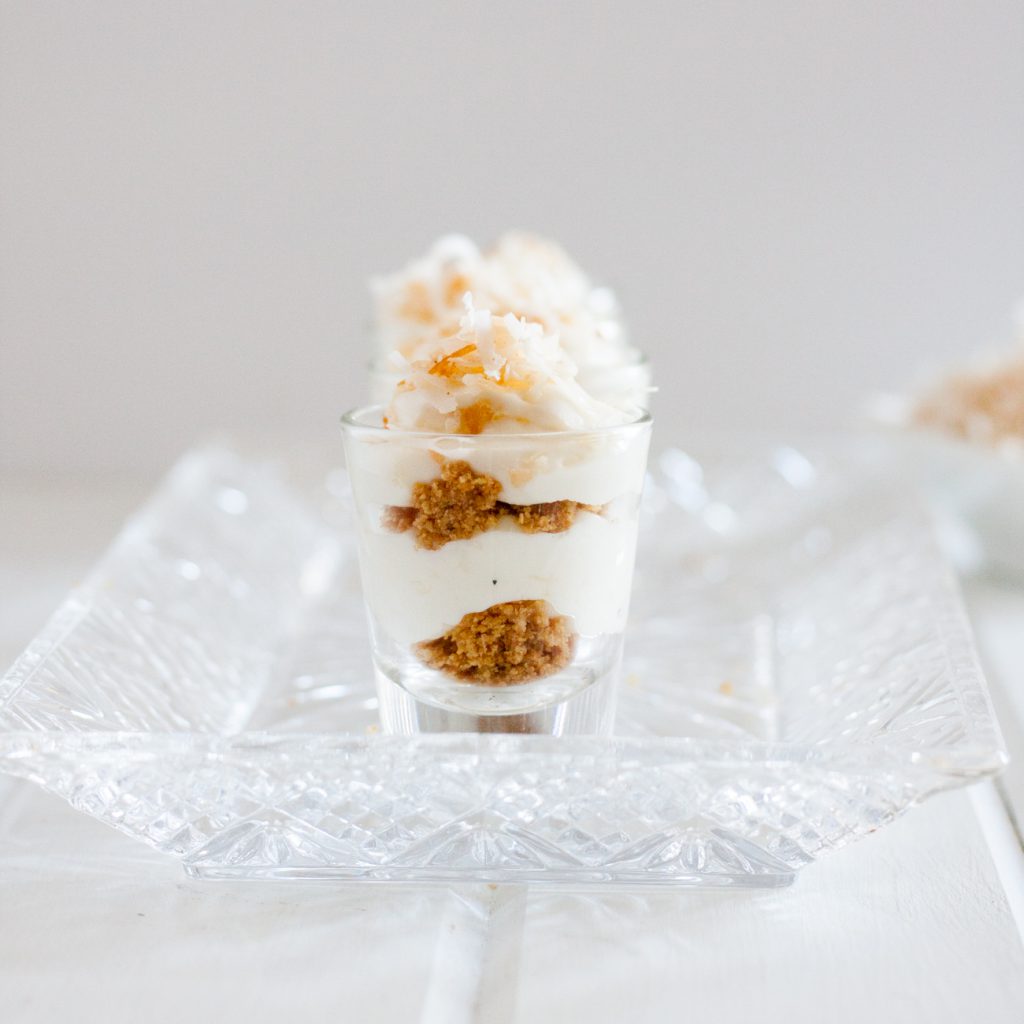 For another tasty dessert shooter recipe, check out Meaghan’s no bake key lime dessert shooters. They’d be a perfect pairing with my no bake pina colada cheesecake shooters for a miniature dessert party!

* To toast coconut flakes, place the coconut in a dry skillet over medium low heat and stir 3-5 minutes until light golden. Remove from the heat and transfer to a plate immediately

Oh wow! This is absolutely genius! These would be such a hit at a summertime party!

Yes!! I've been wanting to make some kind of no-bake cheesecake thang. And I have soooo many unused grahams after a poorly informed attempt at stovetop smores. Making these ASAP!

Right up my alley! I love anything pina colada, and the cheesecake bit is just the icing that wraps it up for me.

Ooohhh! They look so elegant and perfect sitting on that crystal platter! I'd love to hear more about this evening soiree as I feast on a few of those shooters! :)

These little desserts are so cute! And I LOVE how easy they are - perfect for summer :)