The Tarta de Santiago, a naturally gluten-free Spanish almond cake, is a very traditional Spanish dessert originating from the town of Santiago de Compostela in Galicia. 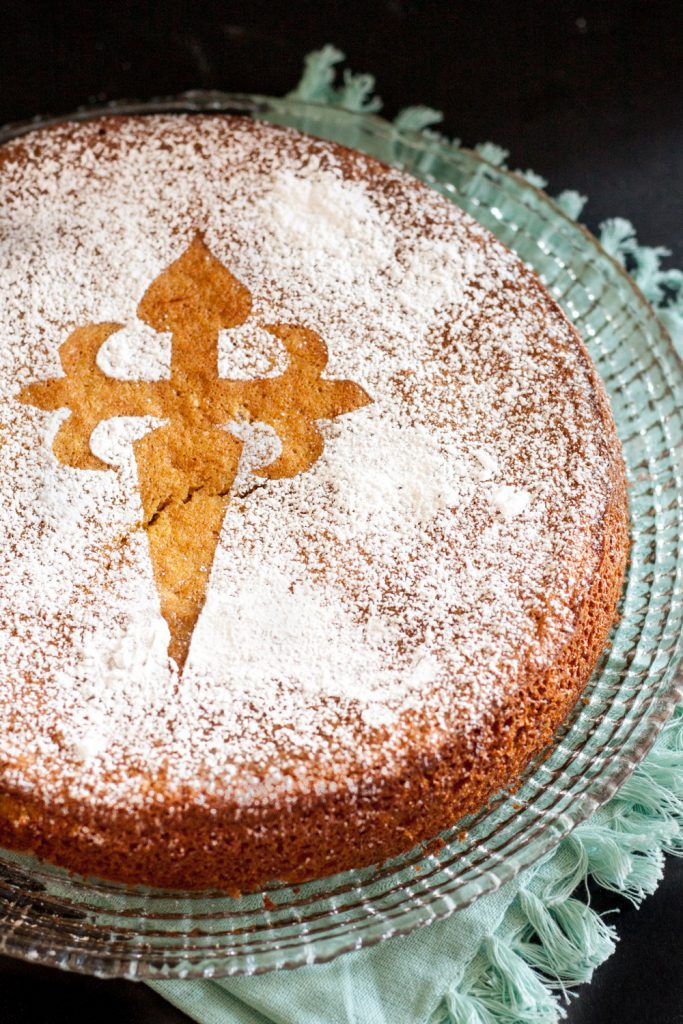 Making this cake was a request from my daddy. He grew up in Spain, where this cake is very common and he requested I bake him this memory. I was very curious to try it as a friend of mine from the flamenco studio where I took lessons in California had also recently completed a portion of the Camino de Santiago and this cake is one she would have seen in countless bakery windows along the way. Besides, almond and citrus just make such a beautiful flavor combination, so the dessert is not just a beautiful way to bring a little Spanish sweetness to your table, it’s also incredibly delicious! 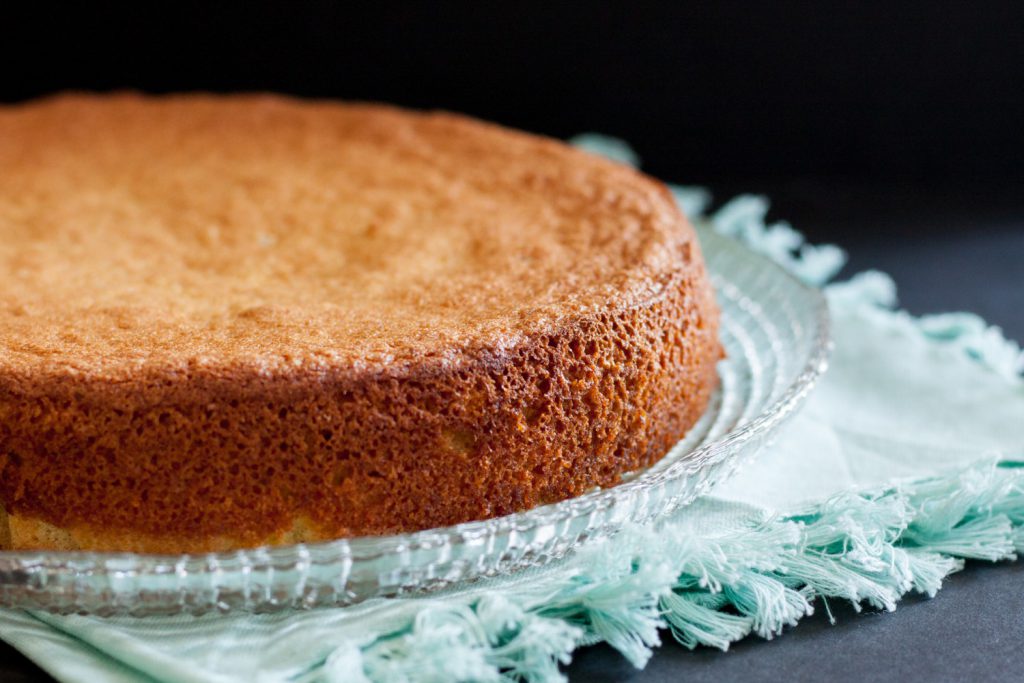 The Tarta de Santiago is so classically Spanish in fact, that it was granted a Protected Geographical Indication in 2006. This means that the government set out regulations as to the recipe and location of origin from which a St. James Cake could originate in commerce to be marked as “authentic.” In its purest form, the cake is an almost even ratio of almonds, eggs, and sugar. It doesn’t always need to have the cross of Saint James decoration on top, in fact, it wasn’t added until 1924, but it has become an almost universally added decoration, so I always include it. I make my stencil by printing an outline of the cross of Saint James, cutting it out, and placing it on the cake before dusting on my powdered sugar. 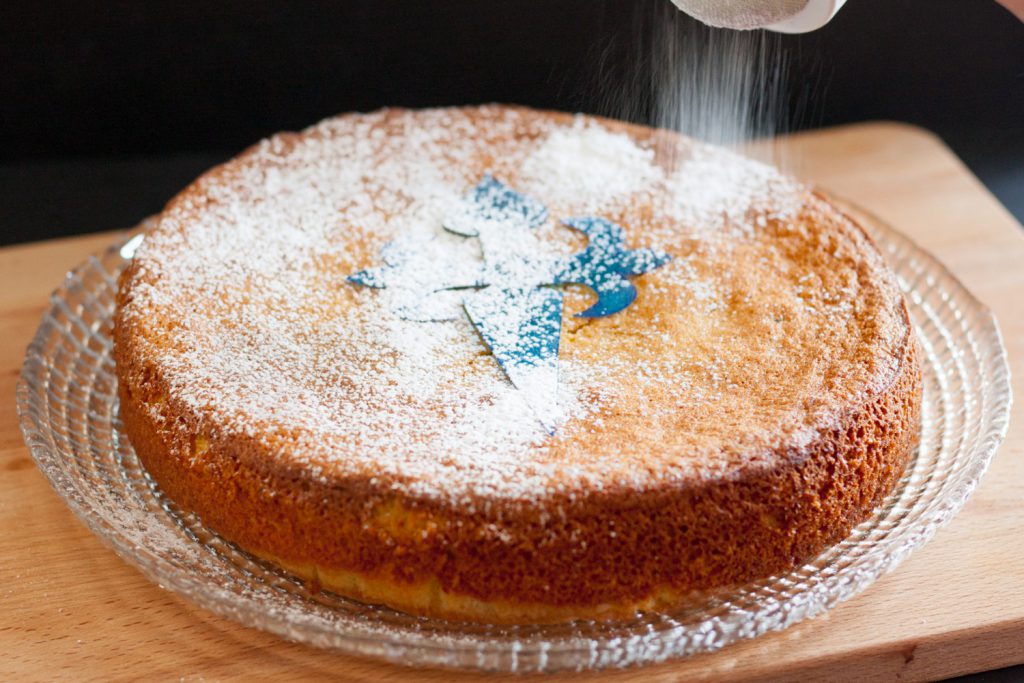 For a lighter texture, I whip the egg whites. Many Tarta de Santiago recipes nowadays do include steps for whipping the whites to create a lighter cake, although it’s believed the “original” recipe just mixed the eggs whole and was very dense. I also add fresh orange zest and a bit of flavoring, which is optional, but I find that it really makes the cake special. In lieu of orange zest you may also try lemon or even grapefruit, and feel free to substitute a vanilla bean for the vanilla extract. These are absolutely modifications from the classic recipe, but the overall ratios for an authentic Tarta de Santiago are there. 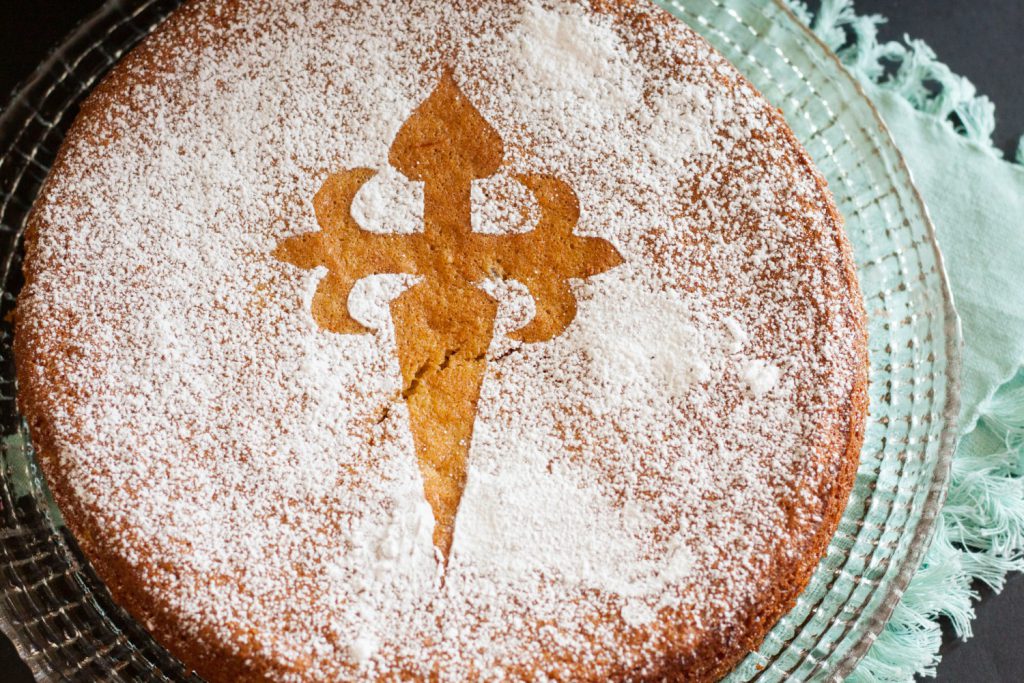 I hope you enjoy this beautiful Spanish cake. It’s a lovely gluten free dessert that’s most often served during July for the Feast of Saint James, but is equally appropriate any other time of the year as a dessert or tea cake. Buen provecho, darlings! 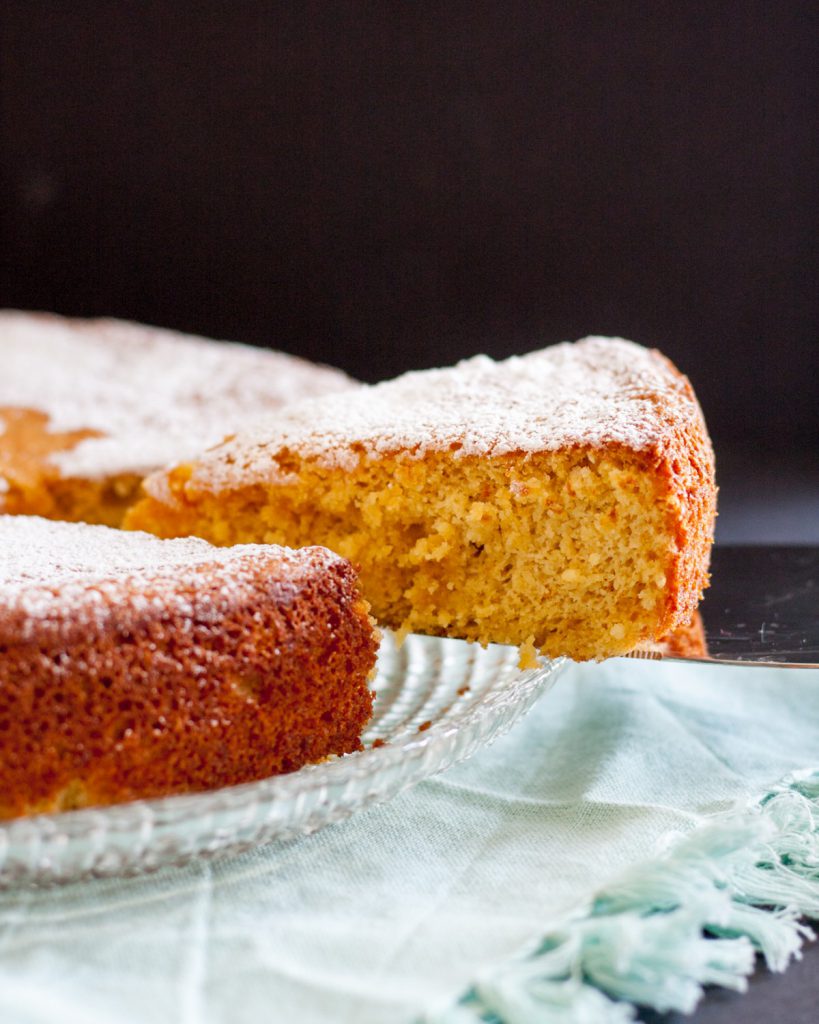 I love this cake! It’s a success every time I make it. Have you ever tried using other nut flour (hazelnut)? I may experiment and make a few substitutions in flavoring to see what happens!

Can this be made in a 9x13 instead of a spring form to feed more people? My son has to make a dish for his Spanish class. :)

I'm so sorry for the late reply! I probably would not make this in a larger pan... you probably won't get quite as good a rise out of the cake and the bake time would be much shorter because it would be thinner. BUT, you can always take a round cake and instead of cutting in wedges, follow the "catering cuts" and cut the cake into a grid. With that method, he should be able to get enough square or rectangular pieces for the class so everyone can try the cake. If you have already tried baking in the 9x13 pan though, I'd love to know your results!

I have offered to make a friend's wedding cake. Although I have never made a wedding cake I am an experienced baker. She is gluten-free. I have several questions:

1.There will be 60-70 people so I was going to do a tiered cake. Will this stand up to tiering (no pedestals)? 2. What size cakes would you suggest for that number of people and how would I adjust baking times? 3. Any advice?

1. This cake isn't a good option for a traditional wedding cake. It's not designed to be frosted, nor will it work well as a layer cake. Your best option would be to test out something like my gluten free vanilla cupcakes, or take something like my almond cake from scratch and substitute a 1-to-1 gluten free flour for the all-purpose flour in the recipe.

2. Wilton has an excellent guide for figuring out how much cake you should make depending on wedding party size: http://www.wilton.com/cake-serving-guide/cms-baking-serving-guide.html . Be sure to provide this chart to the caterers so they know how many slices to cut from each cake. For weddings, I usually err on the side of caution and assume the final number of servings will be somewhere between the "party"-size slices and "wedding" slices. They are not large slices, and it's better to have extra cake than not enough.

3. With such a large cake, be sure to give yourself plenty of time to work ahead. You can always freeze cake layers in advance so you aren't baking so many at once. Since you haven't made a wedding cake before, it might be worth practicing and making one in advance so you can tier the cake and work out any kinks. As with any large tiered cake, be sure to build in appropriate supports for each layer using bubble tea straws or cake dowels. Another excellent option to keep in mind is that you don't necessarily have to build a cake large enough to feed everyone. If you're most comfortable with a smaller 2 or 3 tier cake, you can make that, and then supplement with extra smaller cakes for the caterers to cut and serve. This is common practice, and can help save your sanity since a 60-70 person cake is quite large.

I hope this helps! Best of luck and congratulations to your friend!

I finally made this for Easter this year and am just now getting around to telling you! It was amazing. I can't wait to make it again!

Wonderful! I'm so glad you liked it!