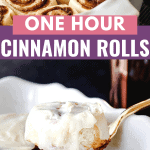 When you can’t wait for fluffy, delicious cinnamon rolls, make this one-hour cinnamon rolls recipe! These easy cinnamon buns are perfect for weekend mornings, or any time you need a quick cinnamon roll fix, from scratch!

I think I went a solid 6 months without making overnight cinnamon rolls after working out this recipe, darlings. At first, it was for testing, and then for practicality. Turns out, my oldest loves cinnamon rolls. And on weekends where we had family in town or just wanted something extra special for breakfast, this was an easy recipe to whip up on a whim. I’ve actually timed this recipe and it’s ready in a little under an hour. Nevertheless, I’m leaving the hour limit so we include a few minutes for setup and the (minimal) cleanup.

These one-hour cinnamon rolls use instant yeast – or pizza yeast – for a nice quick rise and fluffy texture. If you need a no-yeast recipe, I have a fabulous one for you here. It’s also a from-scratch recipe, like this one. The final textures are just slightly different though, because of the yeast.

What is instant yeast?

Instant yeast, sometimes called rapid rise or quick rise yeast, is a type of yeast you can find in most grocery stores. You’ll find it sold in packets typically in the baking section.

With rapid yeast (the best option for this recipe), the yeast is milled finer. Not only do you not need to activate the yeast, you don’t even need to give the dough two rises.

This is key to give you the best results for this recipe because there’s almost no rising time. You mix the dough, then allow it to rest for just a few minutes before shaping and rolling. That’s all you need for fabulous and quick cinnamon rolls though.

A few recipe notes for these one-hour cinnamon rolls…

I almost feel like I shouldn’t point this out, but this recipe is a slight modification on my super easy pizza dough! It’s an old recipe, but it’s pretty amazing if you haven’t tried it. It was curiosity that led me to mess with it and see what changes I could make to create a sweet dough.

At some point, I think I told the Godfather I was going to make a dessert pizza. The blog archives will tell you that clearly didn’t happen. But these cinnamon rolls did, and cinnamon rolls outrank pizza in my dessert hierarchy. One day it’ll happen. Good thing, the dough is already on point!

Otherwise, I don’t have any other huge tips for this recipe. It’s really straightforward and simple. Simple is wonderful nowadays, darlings.

The last note I’ll leave you with has to do with baking and storage. If you don’t want to bake up all 12 cinnamon rolls, freeze some! Place the rolls you don’t intend to bake on a parchment lined baking sheet and freeze until solid. Then you can store them in a freezer ziploc bag for up to a month.

Bake the frozen cinnamon rolls straight from the oven, add an extra couple minutes to the baking time. While this recipe is easy, it’s easier to prep a dozen, then store what you don’t need.

I hope you love these easy one hour cinnamon rolls from scratch, darlings! Happy baking!

For the Pan and Filling