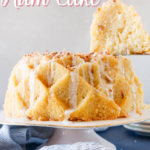 Toasted coconut rum cake is a tropical favorite with a twist! This tender and moist rum cake from scratch has a lovely coconut flavor thanks to coconut milk and coconut rum. It’s a great make-ahead boozy cake for a party, and if made in loaves, freezes beautifully for later!

A good rum cake recipe is a treasure, darlings. Balanced, sweet without being cloying, and flavored with just the right amount of rum to have a little kick. When you find one, you save it and use it. This is why you haven’t seen a rum cake on the blog since I posted my Better Than Tortuga Rum cake. We had no need, until now. Now, we have another tasty cake to add to our repertoire in this toasted coconut rum cake.

What is rum cake?

Rum cakes are very popular in Caribbean countries, where rum is produced. The rum cake base is a vanilla or chocolate butter cake that is soaked with a rum glaze while still warm. They are made in a variety of different shapes. The most common are bundt, loaf pans, or sheet cakes.

While the cake is still warm, a sugar and rum glaze is poured over the cake. The glaze soaks through providing both moisture and flavor. Most rum cakes are unfrosted, especially in loaf and bundt form. Sometimes, bakers will frost rum cakes with stabilized whipped cream if they desire.

The cakes are soaked in alcohol. Most recipes, including this one, don’t have enough rum to make you inebriated. You’ll get a stomachache from too much cake first! Use your best judgment on who may partake depending on how liberally you interpret the rum measurements for the glaze in the recipe.

To really infuse the coconut flavor into the cake, we add coconut in both the batter and the glaze. The cake is made with coconut milk – the canned kind – and coconut rum.

If you want to make this coconut rum cake dairy-free, swap out the butter for a plant-based alternative. Then, don’t use sour cream and regular coconut milk. Look for a can of coconut cream, unsweetened, and use that instead of sour cream and coconut milk. No one will ever know the swap, and you’ll get an extra natural coconut flavor boost!

The one thing I don’t use in the cake itself most of the time is shredded coconut. You can add some in the batter if you’d like, but not everyone is a fan of the texture. Flakes work better than shreds.

When I only have shredded coconut on hand, I stick to coating the top of the cake with toasted coconut. If I have flaked coconut, I’ll add about a 1/2 cup of toasted flaked coconut to the batter.

Glaze adjustments based on cake shape…

The basic glaze recipe remains the same regardless of the cake shape. Buuuuuuuttttt, I have some notes on how to best distribute the glaze depending on cake shape. Those of you who tend to be a little heavy-handed with the rum pours, this is your section.

Bundt cakes, while my personal favorite for rum cake shaping because they’re pretty, are the trickiest when it comes to glazing. The cake is thick, so you’ll want to pour part of the rum glaze over the cake while it’s inverted, and then the rest over the cake once it’s been flipped out of the pan. As you can imagine, this does make flipping a touch trickier.

Start by poking a few holes in the inverted cake, then pour between 1/3-1/2 of the glaze into your bundt pan, slowly. Allow the cake to rest a few minutes, then invert. Or use whatever flipping mechanism works for you to release bundt pans. Everyone has their favorite trick.

Once the cake is inverted, place it over a rack, poke a few more holes in the cake. Slowly pour the rest of the glaze over the cake. You may want to work on a cooling rack placed over a rimmed baking sheet as you’ll spill a little. I usually flip my bundt pan onto a cake board that’s about the same diameter as the cake. That makes soaking and transferring to the final cake plate easier.

Loaf pans are more forgiving than bundt cakes because there’s no flipping involved! You can easily add more rum here for more soak if the loaves will cool in the pan. Just know that if you’re baking in paper loaf pans – like for gifting – look for pans that have a bit of a protective layer lining the inside. It keeps your packaging from falling apart.

Bake this as a 9×13-inch sheet cake. Then rum amounts are really open to interpretation! I worked with someone once whose wife would use the entire 750 mL bottle between the cake and the glaze when she made a rum sheet cake. Then it’s definitely a dessert for the 21+ crowd!

You cannot be nearly as heavy-handed with any of the other cake shapes because the cake will not hold its shape! The sheet pan really helps. I also serve this version chilled because of the whipped topping.

A rum cake that doesn’t have a whipped topping can be kept at room temperature up to 3 days. Refrigerate for up to a week, or freeze for 3 months. Loaf-shaped cakes in their pans freeze best, in my opinion since they are the easiest to wrap.

If you don’t have cake flour, make your own! Just measure out one cup of all-purpose flour into a bowl. Remove 2 tablespoons. Add 2 tablespoons of cornstarch and whisk very well to combine. That’s it! All you’re doing is lowering the overall protein content of the flour in the recipe. This creates a lighter crumb that makes a better base for the rum.

There are so many coconut milk options available! You find coconut milk in the non-dairy refrigerated section and in cans on the shelf. The best coconut milk to use for this recipe is the canned coconut milk. It’s thicker, and that richness gives the cake more flavor. Just be sure to shake the can very well to mix the water and cream before you open it.

Be careful not to pick up “cream of coconut” which is a sweetened coconut milk mixture used in cocktails and other desserts. This will be too sweet for your cake!

As for the coconut rum, buy your favorite brand! Today I used Malibu black, the higher proof rum. Incidentally, this is also the only coconut rum you can use if you want to make a coconut rum vanilla extract. The others don’t have a high enough proof to be safe for extract making.