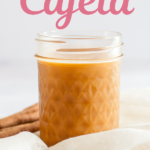 I rediscovered goat’s milk this summer, darlings. We can thank brunch at a local diner, actually. The Godfather and I were waiting in line for our table, and a poster on the wall had an ad for the restaurant’s goat cheese cheesecake. I told the Godfather I was going to make some and add caramel. He rolled his eyes a little since he only likes goat cheese in warm savory dishes, but when I get a certain look, he knows I’m going to make what I want anyway. I haven’t made the cheesecake. In case y’all haven’t noticed, it’s about a million degrees outside and just getting hotter. But the siren song of goat-based dairy called to me, and I ordered some goat’s milk from my milk farmer.

Let’s talk about goat’s milk for a moment, shall we? One can find goat’s milk at the store in a can, but if you can buy some from a farm, you’re in for a treat! First of all, goat’s milk doesn’t taste like goat. Fresh goat’s milk is just creamy and slightly sweet like cow’s milk. And unlike cow’s milk, goat’s milk is naturally homogenized, so it doesn’t separate, making it perfect for sauces. I actually made a batch of cheese roux sauce to freeze for easy mac and cheese for Princess A using the goat cheese. She ate the mac and cheese I served and had no idea I used a different milk. The sauce came together perfectly and, in my opinion, had a better texture. So I knew it would be perfect for making goat’s milk dulce de leche, also called cajeta.

This process takes about 2 hours to complete, so plan it for a lazy weekend afternoon when you’re at home and can keep an eye on the pot. I tried this in the slow cooker and the results weren’t as good, so stick to the stove top. The process is very simple. You just mix everything together, bring to a boil, simmer uncovered for a looooong time, and voila! Dessert magic.

So far, we’ve used this perfectly drizzle-able sauce as a dessert topping, in a fancy homemade latte, and in one summer-perfect recipe I’m sharing next week. But I’m giving you a head start on the cajeta, because you’ll want to keep a jar of this around.

This recipe has a final consistency like caramel and is perfect for drizzling. If you're looking for a more spoon-able consistency, either simmer longer, or reduce the amount of sugar to 1 cup and the amount of goat's milk to 3 cups.