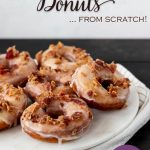 Sweet and salty are a wonderful combination and make these maple bacon doughnuts a treat that won’t last long!

I’m getting a little antsy to start posting the fall recipes, clearly. I have a few summer-ish recipes still coming, but the weather is starting to show the first signs of cooling (some days) and college football just started. So… fall flavors it is! And from the looks of it, maple bacon is an any season flavor for many of you. Then there’s the crazy deliciousness that is the homemade doughnut, and lots of people are off today, so you even have time to make this! Forget burgers, let’s celebrate with maple bacon doughnuts!

Actually, that was kind of the inspiration for this recipe in a very roundabout way. The Godfather and I took small one on an adventure out to Baltimore and we happened to pass a doughnut shop selling doughnut ice cream sandwiches. Amazing, right? We split one – we always share desserts – and it happened to be a maple bacon doughnut with chocolate ice cream.

I *almost* made that for this post, but the Godfather told me to scale it down a bit. This sentence is me telling you that if you make these, get some chocolate ice cream and have yourself a fresh maple bacon doughnut chocolate ice cream sandwich. Live a little. 😉

Talk to me about the donut dough…

Because I was making a mixed batch of doughnuts, I used a rather basic doughnut dough recipe for the base. This is what I usually do when I make this because my humans think I run a one woman bakery and would like assorted donuts from scratch. If yours feel the same, do as I do. That opens up the possibility for a variety of glaze flavors and toppings.

If you have bacon lovers, keep reading…

When I commit to making strictly maple bacon doughnuts I swap 1 tbsp of the butter in the dough for bacon grease. If you don’t have any bacon grease, fry up a strip of bacon, use the grease from that, eat the evidence. This step is optional! With it, you get a slightly more bacon-y donut, but no one complains without it.

Can I make the dough in advance?

Yes, you can! But it’s still going to be an early morning if you want to serve these for breakfast. To save a little time, mix the dough the night before, and then cover and refrigerate before the first rise. The next morning, you can roll, cut, and let the dough rise the second time. This cuts morning prep time by over an hour, and the cold dough is easier to cut and roll.

Do I have to fry the doughnuts?

This particular recipe is designed for frying, so I’m not sure of the results if you bake it. Thankfully, there are plenty of baked doughnut recipes out there. I have red velvet, lemon, and gingerbread for you to try on the blog, and this one from KAF is a great basic!

Recently I acquired an air fryer, and tried making a few doughnuts in that, and it worked pretty well! It took about 4-5 minutes at 400 F in my little basic unit. I flipped the doughnuts partway through the cooking process. Spray the basket and the doughnuts with a little nonstick spray before frying. The result isn’t quite identical, but it was close enough and the ladies I made them for enjoyed them. It was about a 50/50 split preference traditional fryer to air fryer.

I hope you enjoy this recipe! Happy almost fall y’all!