Whether you are for the First Order or a member of the Resistance, the Force is strong with these Star Wars macarons! 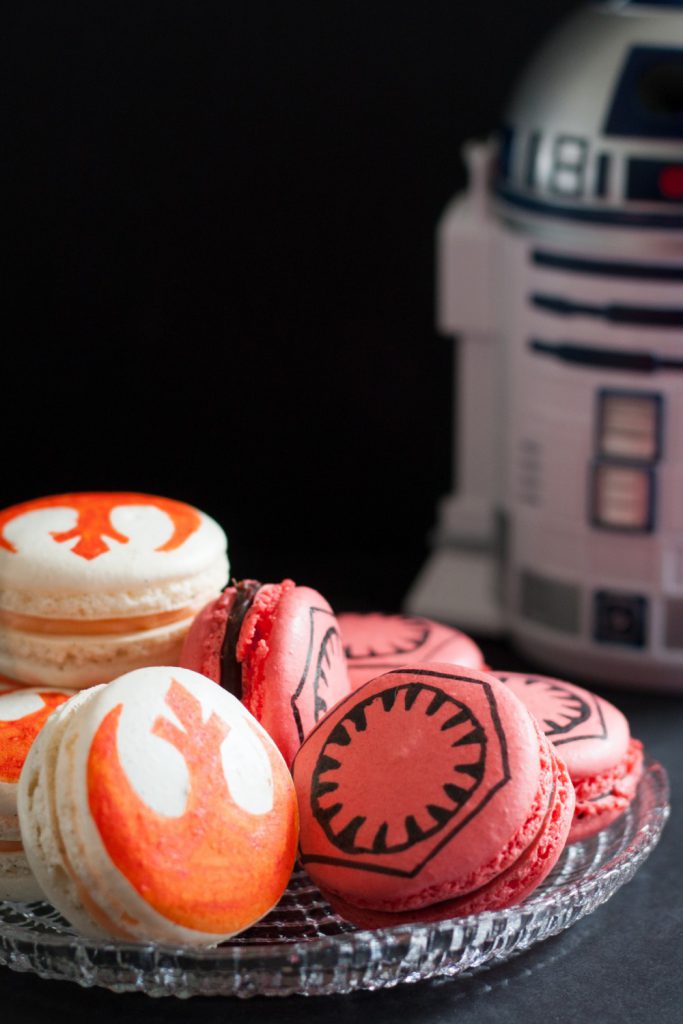 I am typing this with just hours left on May 4 (May the Fourth be with you), but I couldn’t let today go by without something Star Wars related. It was too perfect! Of course, I didn’t realize this a week or so ago because this year has been such a blur so I literally made and shot the pictures for this post today, but no matter. It’s done! Maybe these macarons are a little late for this year’s May 4th celebration, but Episode VIII comes out later this year and we are READY!

I wanted to create a unique Star Wars dessert idea that was not only delicious and cute, but had something from both the light and dark sides of the Force for balance. Given that it’s an election year, it seemed appropriate to glean inspiration from the two warring political factions in the last movie – the First Order, the “New Empire” and the Resistance, let by General Leia Organa. 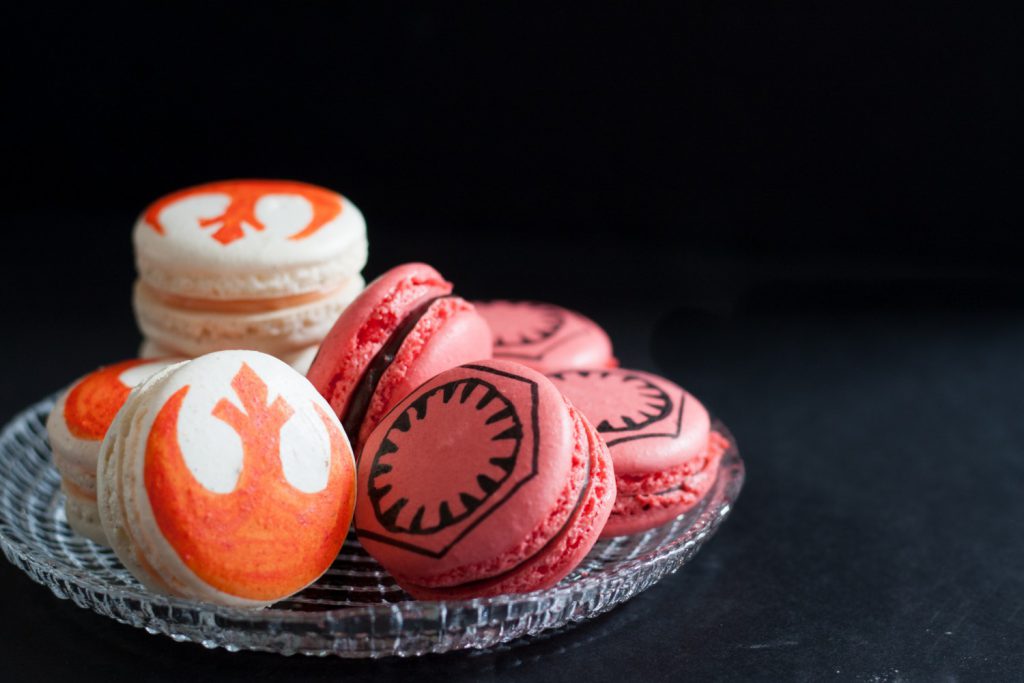 The macarons representing the First Order are chili chocolate. I chose to color the shells red and draw the logo in inverted colors because that is how the logo appeared on a large backdrop in The Force Awakens. The colors in that particular scene really struck me and I even commented as much to the Godfather as we left the theater when we watched the movie. In my opinion, it’s also easier to make the stencil and transfer the design this way, so it works on two levels. 😉

To create your stencil using the downloadable printable I provide at the bottom of the post, you’ll want to cut out two pieces. First, cut out the inner hexagon so when you draw on your macaron shell you get the outline of the logo. For the second piece, you’ll cut out your circle and all the little indentations to make the spokes. Use a stencil or tracing film instead of tissue paper here since you’ll be using the stencil over again and it’s a bit tedious to cut out. I used both scissors for the big cuts, and an xacto knife for the small cuts.

To transfer the design, I first placed the hexagon stencil on the macaron shell and draw the outline with an edible marker. Then place the circle onto the macaron shell and draw the circle and indentations. Because the shell isn’t flat, you’ll need to carefully work in sections and make sure you keep your stencil lined up. Once I got a general outline of the design transferred to the macaron, I removed the stencil and filled in the rest. 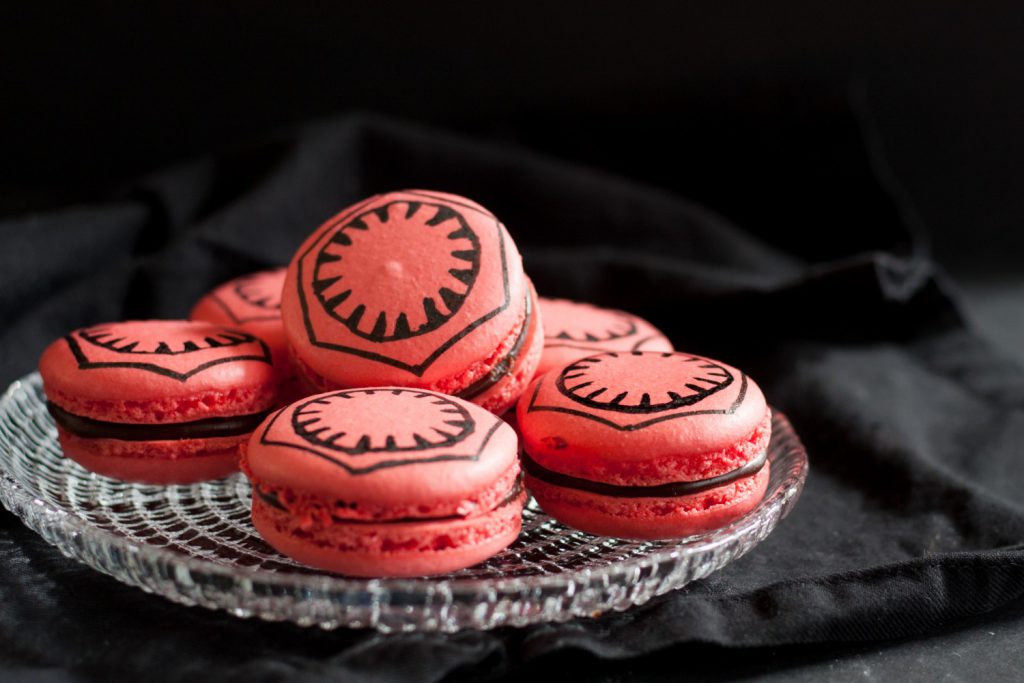 The rebellion logo can be made two ways. Once you cut out the logo from the printable (the xacto knife really came in handy here), you may either choose to hand cut the design onto very thinly rolled fondant using the piece you cut out and carefully transfer onto the macarons, or you can do what I did and simply paint on the logo using and edible paint created by mixing powdered color and clear extract (I used almond). After cutting out the logo, I just cut a circle around the “space” and used that to paint. I hope it makes sense. If not, let me know and I’ll clarify or just take a picture. 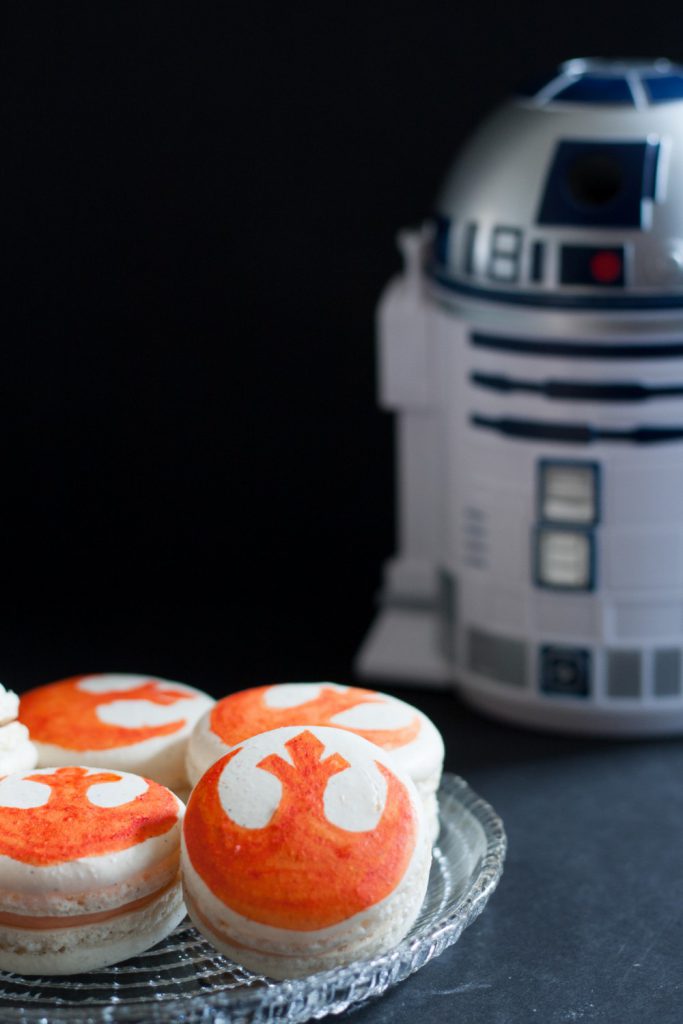 The Resistance macarons are a vanilla bean wild orange. I added the seeds from a single vanilla bean to the shell batter, and filled with a white chocolate ganache I colored using a bit of the same powder I used to make the paint and flavored with essential oils. Pretty cool, isn’t it? I wanted to make an orange cream macaron and then conveniently realized I don’t have any oranges in the house and no orange curd. I did, however, have wild orange oil that I purchased from an oil rep in my running group though, and knowing that particular oil is safe for consumption, I used 2-3 drops to flavor my ganache. The results in this essential oil baking experiment were delicious. So if you want to replicate the flavor, make your local oil person happy and buy a bottle of wild orange oil. It’s not pricey, and I’m actually using it to make some spa presents because it smells nice.

Enough talk from me. I hope you love this tutorial! I’ve included a recipe for the macarons with the two variations below, but if you’re looking for more tips and tricks to making macarons, be sure to check out my Macaron 101 post here.

These are SO cool! My husband is a huge Star Wars nerd and will love it if I make these! I think I'll make a batch before the next movie comes out and share them with all our wonderful nerdy friends

Enjoy! Just be sure not to press too hard on the shells so you don't crush them haha