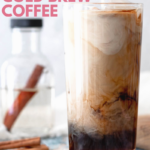 Worthy of a coffee-shop menu, this cinnamon cold brew coffee is easy to whip up at home! You need just 4 ingredients, and you can have homemade cold brew lattes anytime in just a few minutes.

The best part? I bet you, cold brew coffee aficionado that you are, already have the ingredients at home! Let’s play barista, shall we, darlings?

If you really want to get into the handcrafted coffee drink vibe, don’t forget to check out my post on how to make cold brew coffee. In that post, I break down one method for making your own cold brew concentrate using beans of your choosing.

Of course, you can always buy cold brew coffee, which is what I’m doing at the moment. Life has its seasons, and each has different needs.

Pretty much all of them need a good cup of coffee. 😉

If you’ve never made a cold brew coffee before, the basic idea is this:

Simple and very very easy to customize! Today, I’m going to show you how to make a cinnamon cold brew, but it’s really just a starting point.

The inspiration for this recipe came from a family trip to Disney World earlier this year where I saw loads of different cold brew coffees served around the parks. Quite a few were cereal inspired. There was even one with marshmallow cereal like this cake and a fruity one like this tres leches!

We didn’t try them all. We tried a cinnamon-sugar cereal-inspired version, which the Godfather and I enjoyed! As with most theme park food, it was more of a dessert treat, so I decided to make a homemade version we could enjoy with a bit more coffee and a little less sweetness.

When you make your coffee at home, it’s easy to fix it just how you like!

How to flavor iced coffee

I know when I was a coffee newbie, I thought most coffee flavorings came from using the flavored ground beans found at the store! I later learned that coffee drinks are flavored using a combination of extracts, flavored syrups (bacon latte, anyone?), or flavored creamers.

With cold coffee drinks, you need to make sure you use a sweetener that dissolves easily. A certain amount of granulated sugar would dissolve with stirring, naturally, but most would settle at the bottom.

Instead of using a store-bought flavored creamer for this iced coffee, I decided to make my own cinnamon simple syrup!

How to make flavored simple syrup

This is hands down one of the coolest kitchen tricks! Everyone loves the novelty of custom flavoring syrups, which are incredibly versatile!

If you head to a craft bar or coffee house, though, they use what’s known as a “rich simple syrup.” Rich simple syrup is a syrup made with a 2:1 ratio – 2 parts of sugar for 1 cup of water. The resulting syrup has a thicker consistency, and you need less to flavor and sweeten your drink.

The options for flavoring are almost limitless since you can infuse about anything into the syrup. For example, I have a recipe for a ginger simple syrup here and one for a blueberry simple syrup here!

Once you have your syrup made and in the refrigerator, it takes less than a minute to assemble your iced coffee!

Coffee is the easy part! You can either make your own cold brew following your favorite method (I’ve linked to one above) or grab some of your favorite cold brew coffee at the store.

Just like syrup, though, milk is another portion of the recipe where you can show some creativity! You can make your cinnamon cold brew latte with whatever milk you’d like. Here are my thoughts on a few…

Cow milk is a classic option. You can use whole milk for a very creamy texture or skim milk to cut down on fat. In our house, we like using a low-fat 1 or 2% milk for a good balance between the two. Well, unless we have raw milk from a dairy farm. That’s an experience!

Our favorite non-dairy milk option is oat milk. It adds a mild flavor but is creamy in texture. Get vanilla oat milk or unflavored oat milk for the best results. Second to that would be cashew or almond milk. Coconut milk is great too, but it adds a coconut flavor. That’s really good, but if it’s not what you’re in the mood for, avoid it.

I hope this recipe inspires you to make your own coffee creations, darlings! Don’t forget to tag me if you make this!

These nutrition values are estimates. Exact values will vary depending on the ingredients, brands, and quantities used.