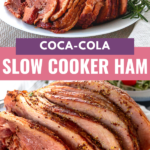 For the easiest slow cooker ham recipe, break out the crockpot! This Coca–Cola ham takes just minutes to prep and comes out perfect every time!

Darlings. Sometimes I do things that make absolutely no sense. Like picking up a SEMI TRUCK SIZED PALLET of Coke at Costco for a party where basically no one drinks it. I wasn’t even in charge of bringing drinks, so have no idea how I rationalized that. This is shopping with a list too. Anyway, as things do, it kind of worked out. We signed up to bring drinks to basically every other social gathering for a short while and got to perfect this coca-cola slow cooker ham recipe. Which is SO easy!

The recipe is almost too easy! You need just three ingredients and ten minutes tops for prep. Then get ready for one of the most delicious spiral hams you’ve ever tasted!

It may sound like I’m a little overconfident here, but it’s because I have verification from an outside source. A neighbor was over the day after The Godfather made this recipe, and since it was about lunchtime, we invited her and her son to stay and eat. They LOVED the ham! And since she knows it usually takes me a little time to get recipes up on the blog, she asked him for the recipe immediately.

I didn’t hold on to this recipe for too long, promise, especially since it will likely make an appearance on our Easter table this year. If you recalled from my Kentucky Hot Brown Casserole recipe last year, we hosted a rather large group of people after Sunday service. I don’t know if we will host the same number of guests this year, but that event could not have happened without a slow cooker ham! Last year we used The Godfather’s other delicious ham glaze recipe, a bourbon honey ham.

Even if it’s just our family, I’ll probably still make a slow cooker ham. It’s just too easy for holiday meals. What other holiday roast recipe takes only a few minutes to prepare and heats while you do other things? If you haven’t been using your slow cooker to make spiral hams, get on that.

For example, the plan Easter morning would be to put the ham in the slow cooker after breakfast and then let it heat while we are at Sunday school and church. By the time we get home, it’s ready to go! I don’t have to turn on the oven, no fussing with timers, and leftover ham is so good.

Naturally, a coca-cola slow cooker ham isn’t only an option for Easter. We made our first one around Christmas and another around New Year. Did I mention the kids liked it? I used the extra in quiche, egg scrambles, wraps, and in quick stir-fries. And when we want something a little more unique, I make a delicious deviled ham spread, and ham and cheese scones.

Now that I think about it, that sounds like a lot of ham, but we were recipe testing. And making a large roast to break down and repurpose leftovers is smart meal prep.

Why should I use my crockpot to make ham?

Why wouldn’t you? First of all, it frees up oven space – always at a premium during holiday meals. Second, since hams are sold cooked, you’re just reheating. And the best way to heat a ham without drying it out is slowly. Finally, did I mention how quickly coca-cola ham comes together? Because I have never made a more straightforward holiday main dish than this that didn’t involve takeout. Ever.

How do I make Coca-Cola Slow Cooker Ham?

First, get a spiral ham that will fit in your slow cooker. Otherwise, you’ll have to cut it a bit to make it fit. Cutting may not be a big deal if you only plan to serve to family or will slice off the bone before taking the ham to the table. But if you are looking for that lovely platter presentation, getting the right size ham is essential.

One of our hams didn’t quite fit into our slow cooker – it was too tall. Since the lid didn’t make contact entirely with the crockpot at first, I wrapped the exposed edges of the cover in foil to make an “extender.” After cooking for about an hour, the ham settled in such a way that I could remove the foil. You may have to do a little careful adjusting depending on how the ham sits in the slow cooker.

Once your ham is in the slow cooker, pour in an entire can of coca-cola. Make sure you pour over the meat. In a small bowl, stir together the sugar and the mustard. Rub the mustard and sugar mixture evenly over the ham. Cover and set on low for 4-6 hours until it reaches an internal temperature of 160 F. If your slow cooker has a meat thermometer probe like mine, use it!

If you remember, use a brush to dab some of the coke liquid over the top of the ham during cooking. This step isn’t essential. When I’m around, I do it at about the halfway point in cooking. If not, I don’t worry about it. You’ll brush the liquid over the ham before plating, so it’s okay!

Once the internal temperature is 160 F, your slow cooker ham is ready. Plate, serve, and enjoy!

Do you soak the ham for about 4 hours in cold water before cooking to remove some of the salt? Is this necessary?

That's fine - I will skip the soaking in water and just follow your instructions. Will let you know how I go on. Cooking it for tomorrow. Thank you

I don't soak the ham at all. I'd imagine soaking it in water could cause a change in texture or make it absorb water that would keep it from absorbing any flavor from the glaze. I would skip that...

Can I use a bone in spiral ham ?

Yes, just follow the cooking directions on the ham to make sure you heat it to the correct internal temperature.