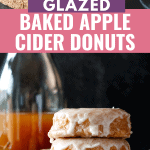 Break out the donut pan (or a mini muffin tin) and whip up these small batch glazed baked apple cider donuts! The recipe makes 6 of the most moist, flavorful, and fall-fabulous apple cider donuts you’ve ever tried!

In a head-to-head test with (quite good) orchard apple cider donuts, this glazed baked apple cider donuts recipe won! Mic drop. Darlings, you may have noticed that this site, while having other donut recipes, didn’t have one for apple cider donuts. Do you know why? It’s because none of the recipes I messed with passed muster. I *love* a good apple cider donut. The way other girls get about sipping a PSL in boots and vests each year? That is *me* with apple cider donuts. Super basic and I doughnut apologize for it. But you see how it also sets the bar insanely high.

Dashing to the pantry and fridge, I grab powdered sugar and apple cider and whip up a quick glaze in a tiny bowl. Being the lady that I am, I’m standing over this bowl, breaking pieces off an un-coated doughnut, dipping them, and demanding everyone in the family come sample right. now. This merited more testing. Another round later, apple cider donuts with an apple cider glaze were approved!

Then came the real test… we went apple picking at a local orchard. We purchased their doughnuts and apple cider. Doughnuts at most orchards come in boxes of either a half dozen or a dozen, so we purchased a half. Each of us ate one, but we took 2 doughnuts home. This was about 2 days after I’d baked the latest batch of my baked apple cider doughnuts. I spotted my leftover donuts on the counter, looked at the fresh doughnuts in my hand, and insisted on a taste test! We split one of each in 4 and sampled. Surprisingly, my doughnut, despite not being as fresh as the other, was moister!

Repeat the next day with the last of each doughnut. We are thorough here, darlings. Especially when it comes to dessert! Again, the glazed baked apple cider donuts won! So… the recipe got fancy pictures and made the blog cut. If you can’t make it to an orchard this year, and even if you can, you should still be able to enjoy apple cider donuts!

First of all, this is a small-batch recipe. That means that you’re only making 6 doughnuts at a time. A dozen doughnuts are amazing and all, but I think we agree that the best donuts are fresh! So if you don’t have enough people to eat a dozen doughnuts in your house, now you have a small batch apple cider donut recipe! Hooray!

The baked doughnut batter itself is pretty straightforward. The only special step is reducing the apple cider. If you’re really in a rush, I suppose you could skip it, but the apple cider flavor won’t be as potent. I use the same technique in my caramel apple cider bundt cake. So you could always save yourself some time and reduce apple cider for both recipes. You know you want to make both anyway. 😉

You don’t have to mix it any fancy way. I often just use a fork to whisk together the dry and wet ingredients and a rubber spatula to scrape the batter into a piping bag. Baked doughnuts really don’t need to be super fussy… they should be the kind of recipe you can make on a whim, in your PJs on a weekend morning.

Speaking of piping bags. If you’re using a doughnut pan for the recipe, use one to transfer batter into the pan! It’s much easier to put the doughnut batter into the wells when you pipe it rather than trying to spoon it in. If you don’t have a piping bag, a plastic food storage bag with the corner snipped off will do too.

If you don’t have a doughnut pan, don’t worry! Just grab your mini muffin tin and bake the batter there! You’ll get about a dozen or so mini apple cider donut muffins. And who doesn’t love mini donut muffins?

All About the Apple Cider Glaze…

You might notice that there’s a good amount of glaze for just 6 doughnuts. Typically, apple cider doughnuts are tossed in a cinnamon sugar mixture. But after the little experiment I tried earlier, you probably knew I was going to make this glaze thing official.

Since making my crazy popular discard sourdough doughnut recipe, my doughnut glazing style has changed. Before, I would always glaze baked donuts on one side and that’s it. But with these apple cider donuts, that didn’t feel right. So, I glaze on both sides.

Baked donuts aren’t evenly shaped on both sides though, so I also like to define a “top”, which means that the top of the donut gets a double dip in the apple cider glaze. To have enough glaze for all of this, I make a little more than usual. This is also good if you don’t have a doughnut pan and are making these as mini muffins. You’ll have plenty of glaze to cover them entirely and get the “doughnut hole” look.

I hope you love this glazed apple cider donut recipe darlings! Pair it with your favorite warm beverage if you’d like, and enjoy!